...haven't you heard? - it's the latest rage! At least it is when September weather in BC didn't get the memo about our weekend plans!

We had planned a little long weekend trip about a few hours NE of us - to Mount Revelstoke and Glacier National Parks for a spot of camping and hiking - because frankly it's been waaay too long since we did either. We left Saturday night after Chris finished work, and really we could have figured the first night was going to be a bit of a gong show - it was late, and man, have the nights suddenly started getting darker quicker all of a sudden?! We were in Sicamous around 8pm, still about 2 hours away from our planned campsite and still needing to stop for something to eat. So we ate, then drove on another hour and then bundled into a motel room in Revelstoke! And Sunday morning woke up to rain (good thing we weren't in a tent!) - lots of rain and very dark grey skies. Mountains? - what mountains?! - couldn't see anything above 100ft from ground level the clouds were so low! 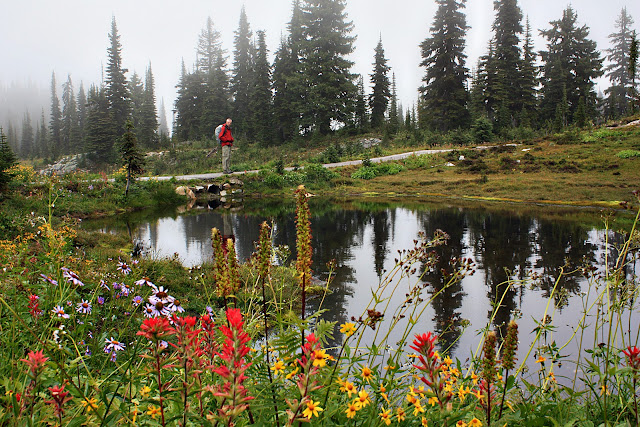 We decided not to rush on to our planned destination of Rogers Pass straight away and instead stayed warm and cozy in the car and took a drive up the Meadows in the Sky parkway in Mount Revelstoke National Park (on the faint off-chance we'd actually get above the clouds!!) Rain or shine it's still a beautiful 25km winding road up the mountain. At the 25km marker you have to get out your car and make your way up the final kilometre to the summit - it was flippin' cold! We bundled up in winter gear I was really not anticipating using for at least a couple more months and made our way up the trail. 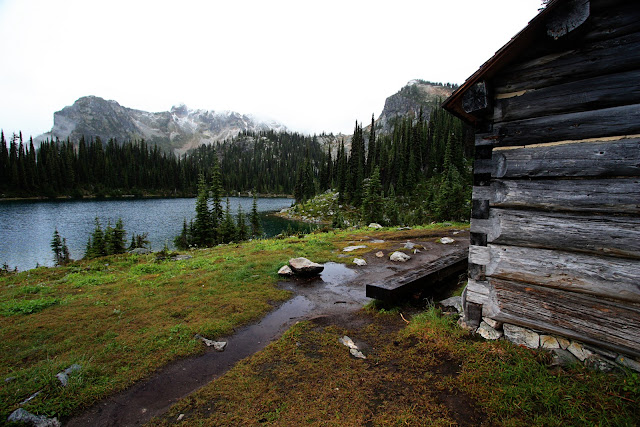 Once at the summit we took a backcountry trail onward to Eva Lake - the promise of a lakeside cabin in which to have our lunch was incredibly appealing. The cabin was a godsend! We cosied up as best we could, cracked open the wine (medicinal of course - we needed warming up from the inside out!) and had our lunch - great hunks of cheesy bread and pasta (Which would have been even more fabulous had I remembered to bring a fork to eat it with!) There were still plenty of beautiful, colourful wild flowers out on the trails and I loved the raindrops on these leaves! 16km later we were back at the car feeling great! (but still very wet!) 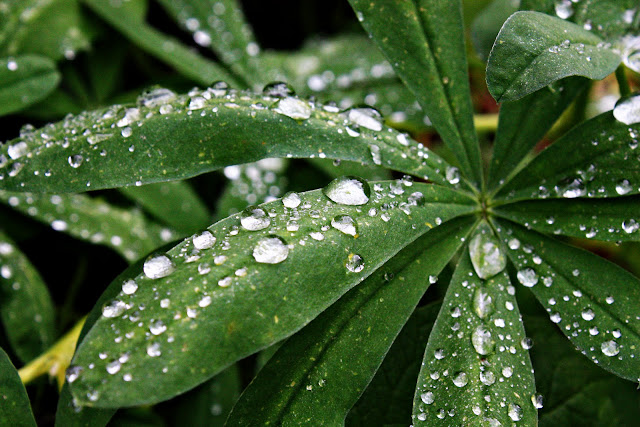 We headed east to Rogers Pass and stopped by the visitor centre to grab some trail info and maps and to make our decision about where we would stay that night - the original Plan A campsite was just up the road, and was the trailhead for many of the trails we'd had our eye on for the next day. But in the end Plan Z came into play - a warm motel bed and restaurant fare. We headed yet further east to Golden. And discovered a very fabulous restaurant called The Island where we whiled away our evening and toasted our 'great outdoors weekend adventure' with many glasses of wine!

Monday morning dawned a little groggily and and for me a little hobbled - my hiking boots had given me grief on the previous day's hike and I had a raw and bloody sore on my heel the size of a quarter. 2 great reasons to not aim high with today's hiking - and the 3000ft elevation gain on our proposed hike seemed a little ambitious! Instead we headed out on a short trail to Great Glacier - even the 1000ft gain seemed tough going but we ended up way up the mountain with a few peeks of the glacier every now and then as the clouds shifted and more fabulous views below us where we could see the Trans Canada Highway twisting its way through the mountain pass waaaay below us. In some ways it might seem like because you could see it, it didn't give you the sense of the wilderness but actually for me it seemed to put it in perspective. It was great to see just how high we'd come and actually marvel at the feat of engineering building that road was - ridiculous to think that's the main route across this great country! 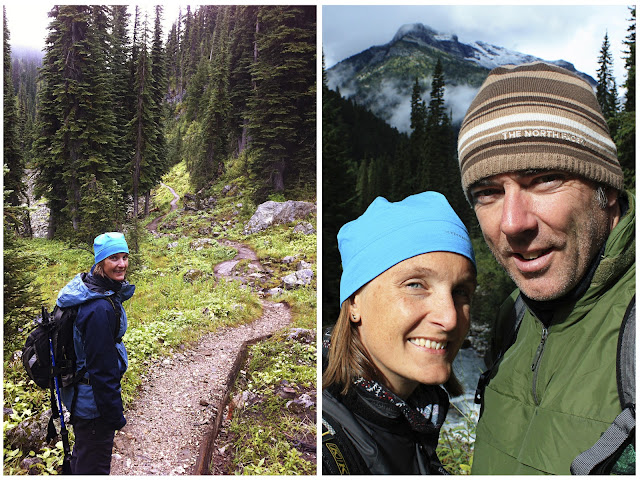 Rogers Pass is a National Historic area, and as we hiked back to the car at we passed by the ruins of the Glacier House Hotel and the old rail bed. When they forged their way across Canada building the railway the CPR built a mountain hotel for travellers and brought in Swiss mountain guides to lead visitors on trails and mountain summits. However the Rogers Pass area was savage in winter and was prone to avalanches - after one particularly bad avalanche where 30-odd people perished whilst clearing the rails from a previous slide the CPR conceded to the weather gods and set about constructing a tunnel under the worst area - thus bypassing the hotel. 10 years after the tunnel opened the hotel eventually closed down and was demolished - but today you can still see remains of the garden landscaping and the foundations of the buildings. There's a great little interpretive trail with numerous photos of the hotel in it's heyday and with a squint of the eye you can really imagine what it must have been like 80 years ago. I LOVE old history like this, so I was quite captivated!

Despite at the rain we had a great weekend. This is exactly what we loved doing for so long when we were travelling - getting to a new area, stopping by the visitor centre and picking up maps and trail guides, then spending the evening devouring them to decide where we would hike and explore during our stay in the area. It's so easy when you're settled and living in a real home (as opposed to one on wheels!) to not get out there and explore, but I do miss hiking and I do miss the mountains - proper pointy, jaggedy big mountains - and a combination of the two....