The SeaWheeze was my 10th Half Marathon and I have so many reasons to love it!

Lululemon sure knows how to put on a good race. The entry fee price tag is quite a bit more than your average half marathon and in previous years I was unsure that it could be 'worth it'. This years race went on sale 11 months ago and I was lucky to get in - it sells out in minutes! So, what DOES your $128 get you? and why I'm utterly convinced it WAS worth every penny!

First up you get a pair of special edition Lululemon shorts, designed with an exclusive print. I gotta say, and this is probably my only thumbs down for the 2015 race - I didn't love the print. We all received these in the Spring giving us plenty of time to train with them before the race.

The race is a Saturday morning so the expo and package pick-up was all day Friday. It started early with the Showcase Store opening at 7am at the Vancouver Convention Centre. Social media has criticized the frenzy of the store setup in past years - it's open to the public and many Lulu' fans go in, buy up everything and then sell on Ebay. This year the first 2 hours were reserved for runners only - a great solution (sadly not one which helped me when I was driving in from out of town 5 hours away). Still....we arrived around 4pm and I made straight for the store. It was in a HUGE room, and there were racks all organised by clothing size. At 4pm there were only a couple of racks for each size, and much of the same items, it was also pretty un-crowded, organized and the room itself quite roomy. I can only imagine what it must be like earlier in the day. I still managed to find items I loved and couldn't resist indulging in several exclusive SeaWheeze items - their classic Cool Racerback, and a Scuba Hoodie both in exclusive prints! (You got glimpses of what else had been on sale by doing a bit of people watching over the course of the weekend! - there are other items I liked the look of for sure but very happy with what I scored! - and probably safer for my wallet that I had more limited choices!) 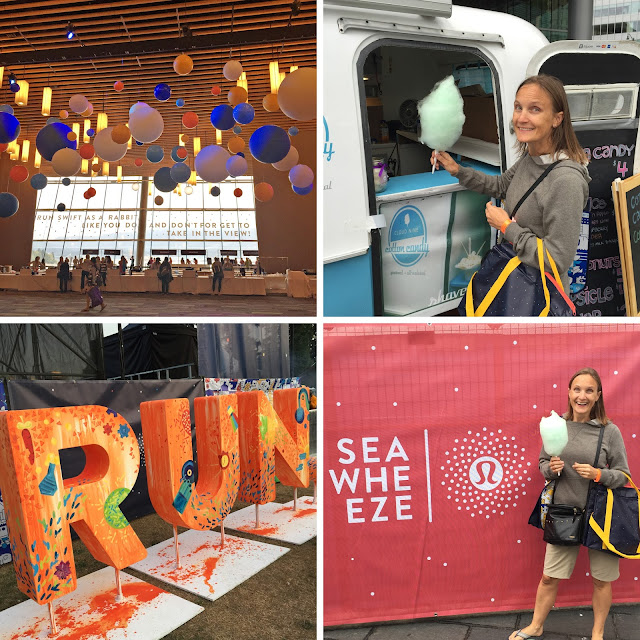 Once shopped we headed through package pick-up then headed outside of the convention centre for the rest of the Expo. It was great! There were free barbershop cuts for the guys, hairdos and nails for the ladies, spray-on SeaWheeze temp tattoos, Saje naturals spritzing you with soothing essential oils, Samples from Vega Sports drinks, Rise Kombucha, Kind bars, Frozen Yoghurt, and free candy floss!! It was a fun, well-put together expo which was great to stroll around (And who doesn't love free stuff!) Later that evening there was sunset yoga which judging by the photos looked fabulous (I however decided to get serious with the pre-race prep and headed out on the town for a curry - uh, yes. true story.)

Race start was 7am Saturday morning. It was a cold one in Vancouver. Around 15 degrees, distinctly grey and cloudy and wet on the ground (though we more or less escaped actual rain during the race). We were staying in North Vancouver and after a brief flapping session by moi the night before about what time the buses started running we opted to just drive ourselves in. It was the weekend so parkade prices were on special pricing and we parked all day for $7 - more than worth it in my books (and actually cheaper than the bus as it happens!). The parkade was underneath the Marriott Hotel and was probably 300 yards from the start line! It was also ideal that I was able to use the hotel wash-rooms (which were clean and no lines!) right up till the last minute instead of porta-potties. Score!

I crammed myself into a corral near the start line. I vaguely recall seeing the 1:45 and 1:50 pace beavers (beavers not bunnies at the SeaWheeze!) but it was the first entrance to the corrals I'd seen when we came out of the hotel I didn't think anything more of it. They set us off in waves with a good 5 minutes between - as it was I was in the second wave!

I started out at a pretty swift pace - but surprisingly I didn't actually feel like I was dying like you normally do in the first mile of a run. Like, not at all. Strange. I rolled with it and just kept the pace up. In the first mile we passed a spinning class set up on one of the overpass bridges pumping out music and cheering us on - I felt in GREAT spirits and got stuck into really enjoying this race - high-fiving everyone I could! The first mile went by in around 8 minutes!, the second mile was even faster.**

The course was gorgeous! The first 2 miles looping through the city and then just after the 2 mile marker we ran for nearly 2 miles along False Creek - you can't beat water views on your run (and of course marvellously flat!), we headed across the Burrard Bridge (where Lulu HQ is and one of their 3 huge cheering squad stations were based - more high-fives for me!), an out and back section in Kitsilano, back across the Burrard Bridge (where there was a bit of drag of an incline getting up and over the bridge - not much to look at when you drive but it's most definitely there when you're running!), and then we got back to the water again - and from mile 7 onwards we pretty much followed the water for the rest of the way! Gorgeous right?! Past Sunset Beach, English Bay and then into Stanley Park to run all the way around the Seawall. More cheering squads, Mermaids sat out on the rocks, SUPers cheering, DJ's playing music, people dressed up in costumes - and I really did just soak it all in. I enjoyed everything about the atmosphere and there was great crowd support and 'stuff' to look at along the way.

I was still doing really well with my pace. And I felt good. At times of course I wanted to slow down or take a break (I've developed a bit of a habit of stopping on runs, that's what comes from having a dog as a training partner - they stop to pee and sniff a lot!) but if I was honest with myself I didn't NEED to so I just kept chugging forward as fast as I could. It hurt. Not in a pain way but in a 'giving it all I've got kind of way. Which really is the point of a race I suppose. The last couple of miles were Tough. I REALLY wanted to stop but I knew this was going to be my day. I tried calling Chris at the final mile (who didn't pick up!) to let him know I'd be finishing earlier than I'd expected to! My pace was awesome. I wasn't super sure if I was going to break the 1:50 mark but it was certainly going to be close. As we came into the final straight stretch to the line the 1:50 pace beaver was next to me shouting at his wards as he propelled them forward to the line. Cheering them on, telling them the line was in sight and to run faster, faster!! I felt like I had nothing left and I desperately wanted to walk. The line eventually came into view for me and I managed to hold out and crossed the line with him! My Garmin said 1:49:36. WooHoo!


I found Chris straight away and caught my breath as I chatted to him over the railings. Then I made my way through the finishers chute, picking up my medal (a big heavy golden carrot!), a mini pouch of Saje essential oils, a Seawheeze baseball hat, then water, wet flannels and a kind bar for some instant recovery. Once away from the mayhem of the finish line I made my way over to collect my finishers brunch consisting of fresh fruit, yogurt, waffle, savoury quiche and juice.


We hung out for a while at the finish. My efforts had really wiped me out! Just goes to show I really did give it everything I had (and that I obviously don't when training coz I don't feel that 'spent' usually).

After a nap and shower we were back out in Vancouver for the evening. I got a much deserved Caesar and food in Gastown before we hopped on the bus to take us to Stanley Park for the Sunset Festival. (part of my entry fee and just $25 a ticket for Chris). We were too late for the Yoga portion of the event but we settled down on the grass for the music. 3 bands over the course of the evening, a craft bazaar area, and open bar - which I loved. So often you can only have alcohol in small fenced off ugly confined areas but after checking ID you were given a wrist band and could buy from the multiple bars and sit anyway in the festival grounds and drink! I'm not usually a lager drinker but I was in the mood to have the special edition SeaWheeze Curiosity Lager brewed by Stanley Park Brewery, we grabbed some food and whiled away the evening as the sun set across the water lighting up the skyline of Vancouver. Pure magic bliss and the perfect end to my perfect day. (and Hell Yeah to me and my rockin' new PR - yeah baby - chip time was 1:49:29!!) I finished in the top 6% of women and top 10% overall which feels awesome!

Check out the awesome race video (I break out in goose-bumps just watching it again!)http://www.seawheeze.com/;


**Lets just talk goals  for a moment....early this season I'd set this race as my GOAL race for the year - My PR was 1:51:26 and I wanted to break the 1:50 mark - 1:49:59 would be just fine with me! That meant I needed to run a mile in 8 mins and 23 seconds - and do that 13 times in a row!! - However my training times had not suggested I was anywhere near that pace and I'd started thinking my goal time was a little lofty (after all my PR was 2 years ago, and since then I hadn't even gone under 2 hours! This summer I did follow a 'get faster' training plan (The 'Train like a Mother Own It' plan) so there was lots of speed work which I've never disciplined myself to do. But often the plan would call for holding race pace for a longer distance or time than I could manage. So as the weeks progressed I had considered that just getting back under the 2 hour mark should be a little more realistic and that aiming for paces more in the region of 8:45 (which would get me a finish of 1:55) instead of 8:23. 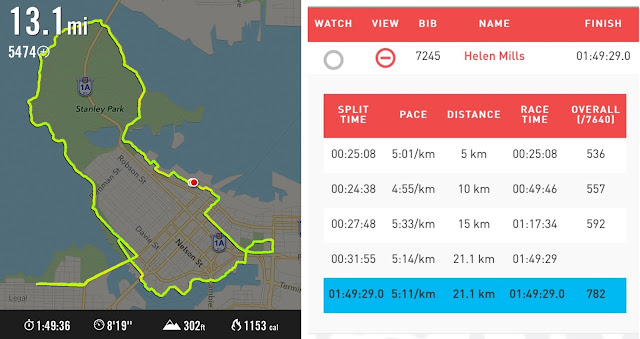