It wasn't exactly billed as my birthday weekend trip - it was actually a trip over to Vancouver Island to buy our new car. But as Chris's luck would have it he was able to kill 2 birds with one stone, get the new car AND treat me to a weekend away - he's smooth like that ;-) 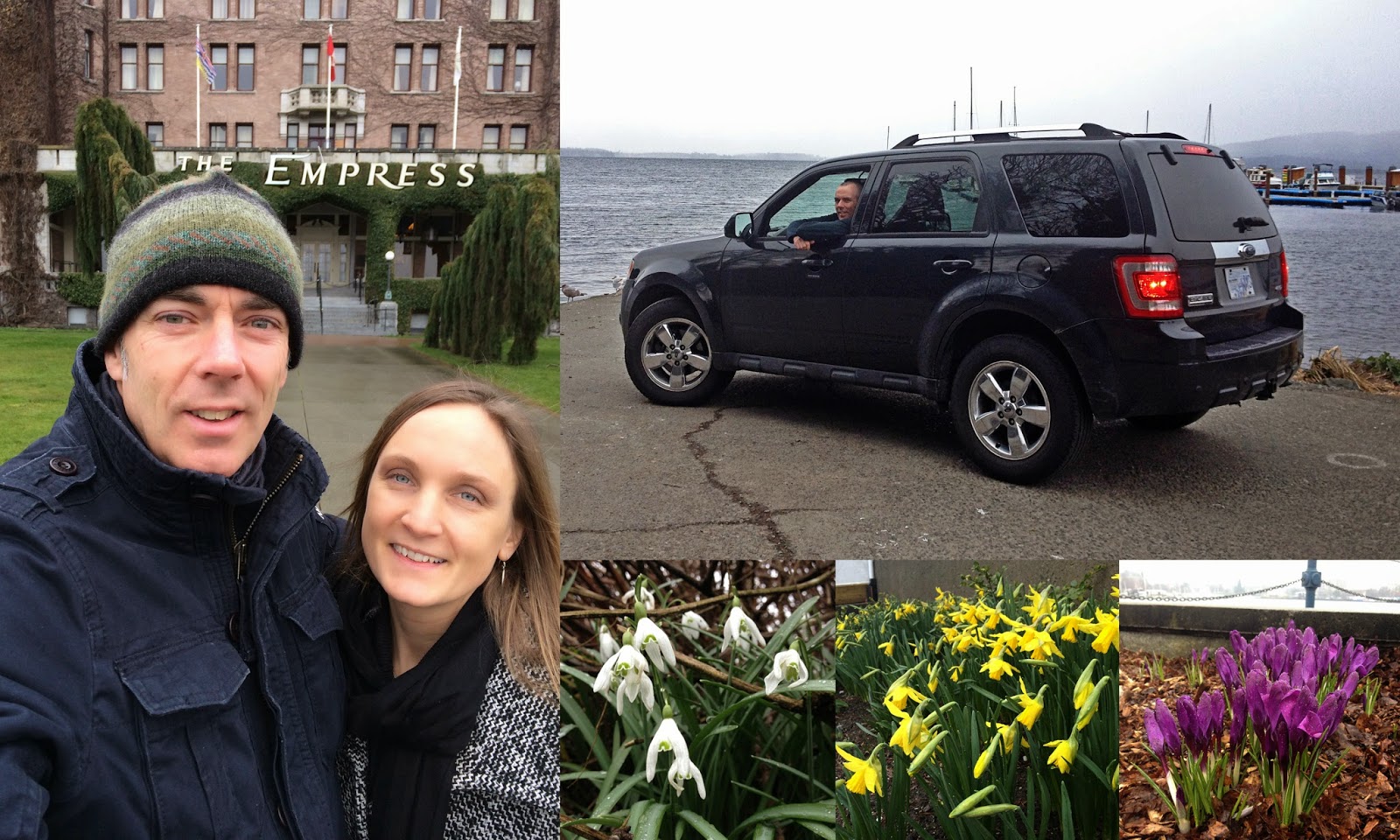 He wasn't quite so smooth when it was decided that the best way to get there was via Greyhound. A 10 hour journey that started in Kelowna at 11pm on a Friday night. Trust me, the greyhound depot in Kelowna on Friday night is NOT classy. At all. I'm getting too old for this shit! 2 people were refused boarding by the driver for being too drunk and another was arrested. And then the on-board toilet was out of order. For a 6 hour journey. Okaaaay then!

After a couple of hours stop-over in Vancouver at dawn and then a couple more hours on the ferry we finally arrived in Nanaimo. A long story short, the car was everything advertised and we bought it (because by that point it was going to have to have something majorly wrong with it to convince me not to buy it and have to get the Greyhound home again!!) So by mid-afternoon the weekend was ours and we had a new set of wheels to cruise in - yeah baby!

We drove down to Victoria and arrived at The Empress Hotel right on the harbourside. Our only other visit to Victoria was back in our second year of travelling - 2006 and we were still in the early years of our RV'ing adventures and long before we even considered emigrating to Canada. And I remember thinking how wonderful, grand and majestic the Empress Hotel was. And it was now our home for the next 2 nights! 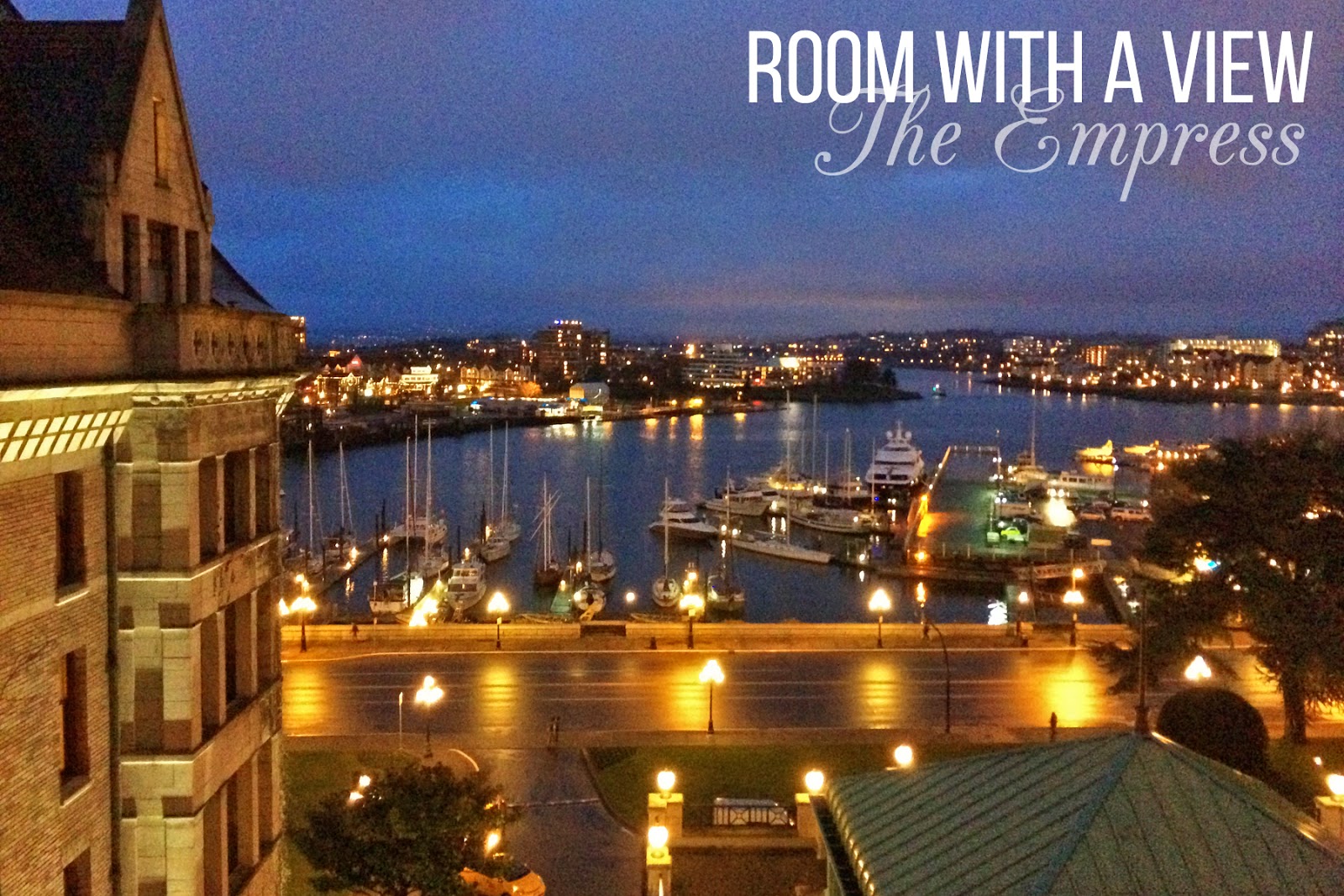 At check-in time our room wasn't quite ready. They'd upgraded us to a Harbour View so to appease us they took out luggage and sent us to The Bengal Lounge for complimentary cocktails. Darn it, don't you just hate it when someone plies you with free drinks?! 3 hours later and long after the room was ready we headed upstairs. A shower was long over-due after the journey and we had brewpubs to visit!

Our first night we headed for The Swans brewpub. We scored a table in the conservatory area which was perfect for people watching and kept a slight barrier between us and the live music - it was good but, hey I was nearly 40 and that music was loud!! And O.M.G the burgers.....I ordered the Swan Song burger but switched out the plain beef patty with a cajun-style charred beef patty and then it was loaded with bacon, mushrooms, cheese, crispy fried banana peppers and beer braised onions. I was drinking their delicious Raspberry Ale - it was so full of berry flavour and in an medium coloured ale - not some dark stout as is so often the case. The berry was so intense it was almost like it was a regular pale ale that they'd then added a couple of shots of rich raspberry liquor in it! Intense, high in alcohol and one was enough to sip on all evening! 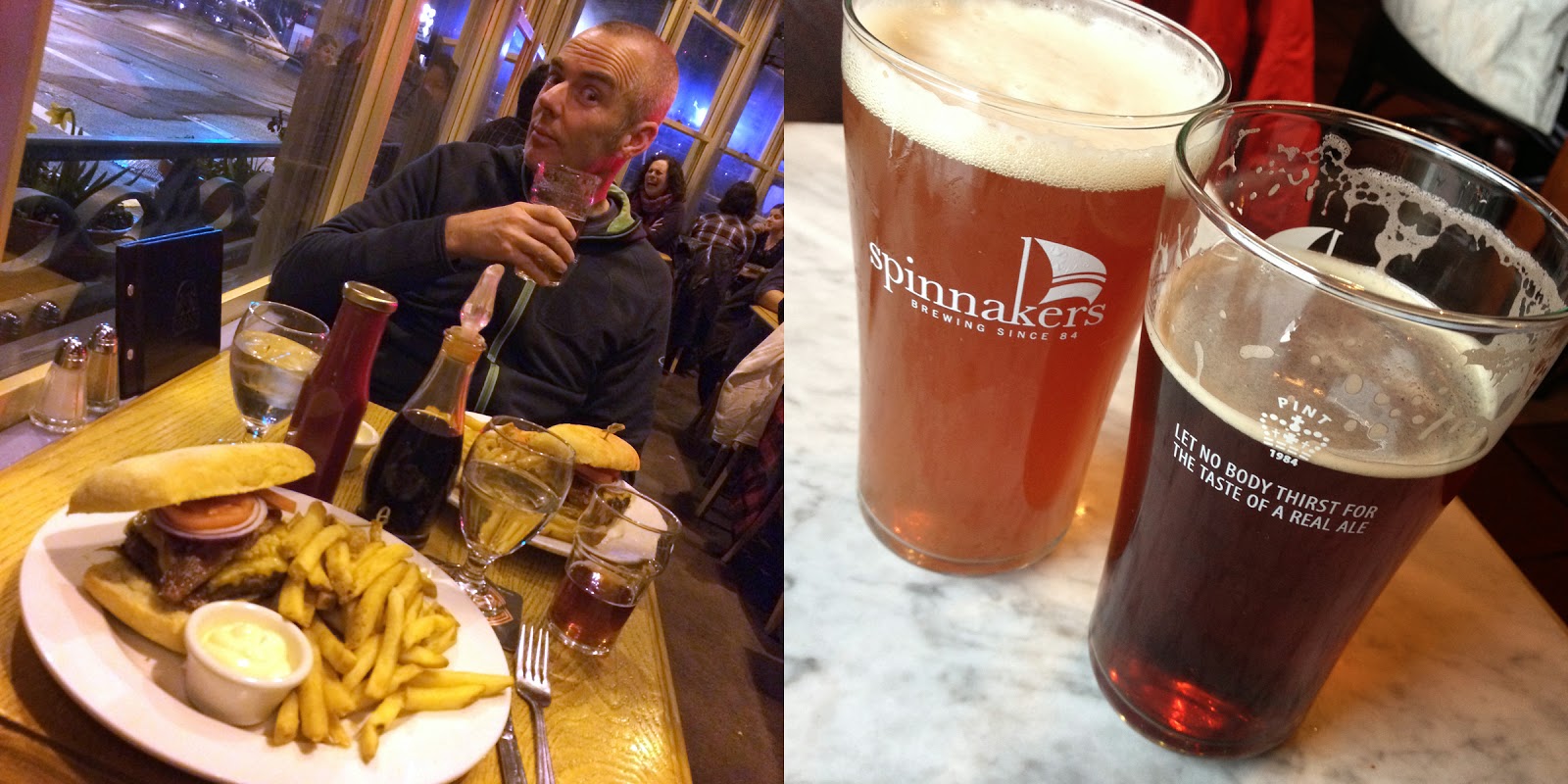 The next morning was grey and drizzling but I headed out for a run regardless. A gorgeous, invigorating 4 miles along the harbour on a Sunday morning. The spring flowers were out - I saw daffodils, crocus and snowdrops, a man walking his parrot and some funky driftwood art 'Fan-ta-sea-Isle' (which I vaguely recalled from 2006 but it's much larger and rather more established these days - the same sailor is there!) 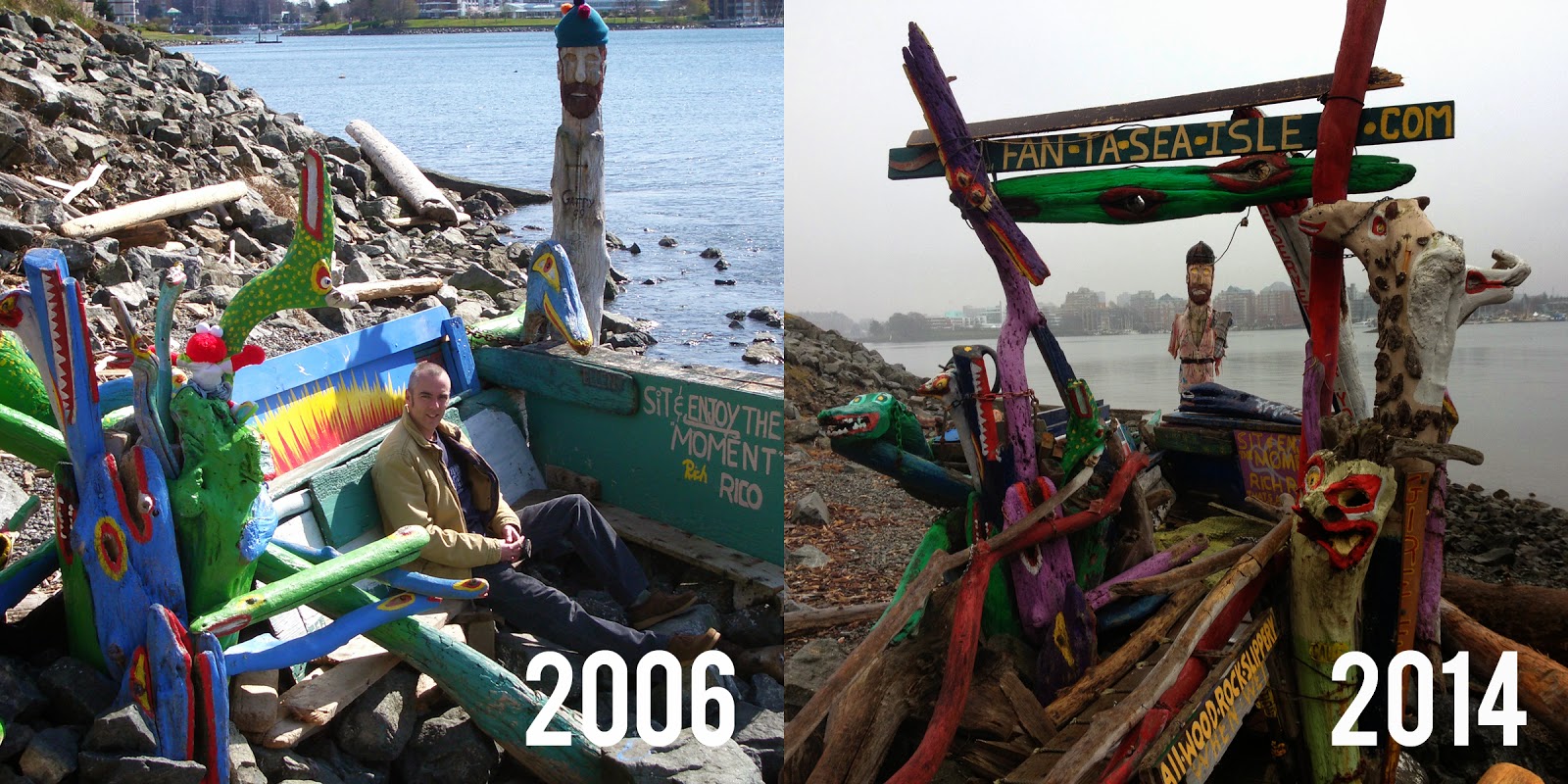 For a late brunch we took a water taxi across the harbour from our hotel to Spinnakers Brewpub. More great local craft beers and a fantastic menu to choose from. We settled in and received fabulous service from our host (who was a fellow Brit!). And when I say we settled in, we sure did. We said goodbye to our friendly server at the end of his shift paid our 'lunchtime' cheque and then welcomed in the new shift for the evening and opened another tab. 8 hours later we took a slow, ever-so-slightly tipsy stumble back to our hotel!! I barely remember what we ate (for either of our meals) but it was good! 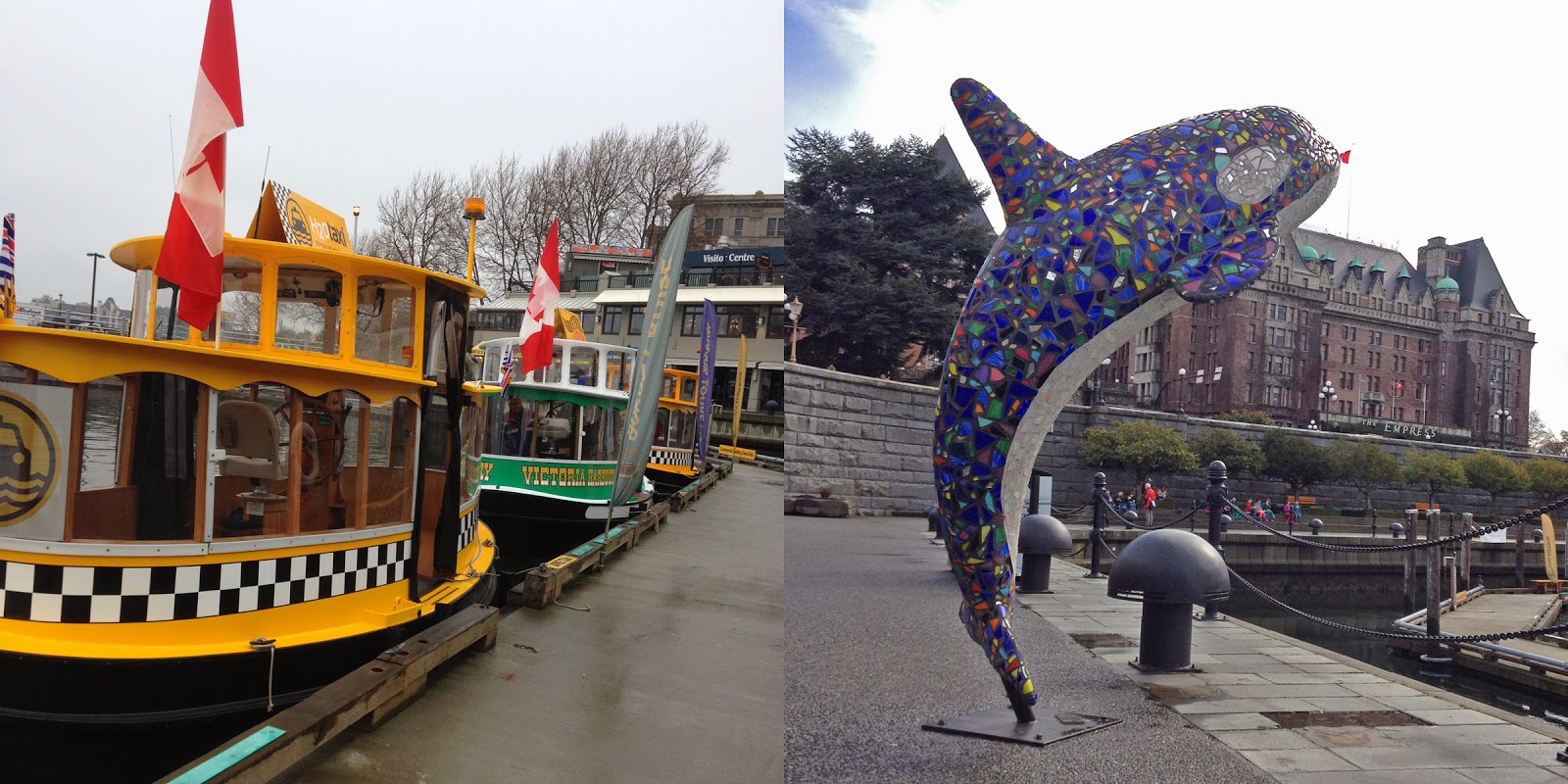 I woke on Monday morning with a 4 in front of my age. 40 does seem old. I was so excited to reach my 30's, but 40, nah.....not so much. After a quick bite to eat in a local tea room we hopped in our new car for the journey home. Our final gastro treat for the weekend was Moby Dick's Fish n' Chips in White Rock - I'm telling you ma' man is classy and smooth when it comes to 40th birthday dining!! (But it was a particular delicious choice which I could highly recommend!)

An awesome weekend to remember in a beautiful hotel in a beautiful city. So maybe turning 40 isn't so bad after all. (But how did Chris manage to end up with the new car for MY birthday?!)
2 comments:

So it's been a few weeks since Chris came home from his trip and I finished up my 10 days of the 21DSD. On his return we had 7 days of eating with no boundaries. Then together we embarked on a mini 7 day Sugar Detox, following all the rules of the program. And then it was my 40th birthday weekend and a trip away for us (so, of course we didn't detox then!)

I'm still very passionate about the Detox and especially the incredible recipes. I think there is a HUGE place in my life for this program, and having been 'on and off' the wagon and given that I never actually completed the full 21 days anyway I'm beginning to figure out how things can look for me and how I'm going to incorporate elements of the program into my life..

What I love about Detox Programs (in general!);
What I've learnt;
I honestly did not experience any change in energy, mood, skin condition or digestive issues. I think in the big scheme of things we eat pretty well already and I wonder since there wasn't a radical change in diet then I shouldn't have expected a radical change in any other aspect. And that was one of the reasons I think I was ready to 'quit' early. But I did totally enjoy the new meals I discovered and the discipline of meal prepping for snacks and getting batches of stuff ready and in the freezer - it's a lotta work but so worth it. I'm moving forward with lots of great 'experience' and recipes to make many changes more permanent.
No comments:

Take me back to Chicago (in Kelowna!) 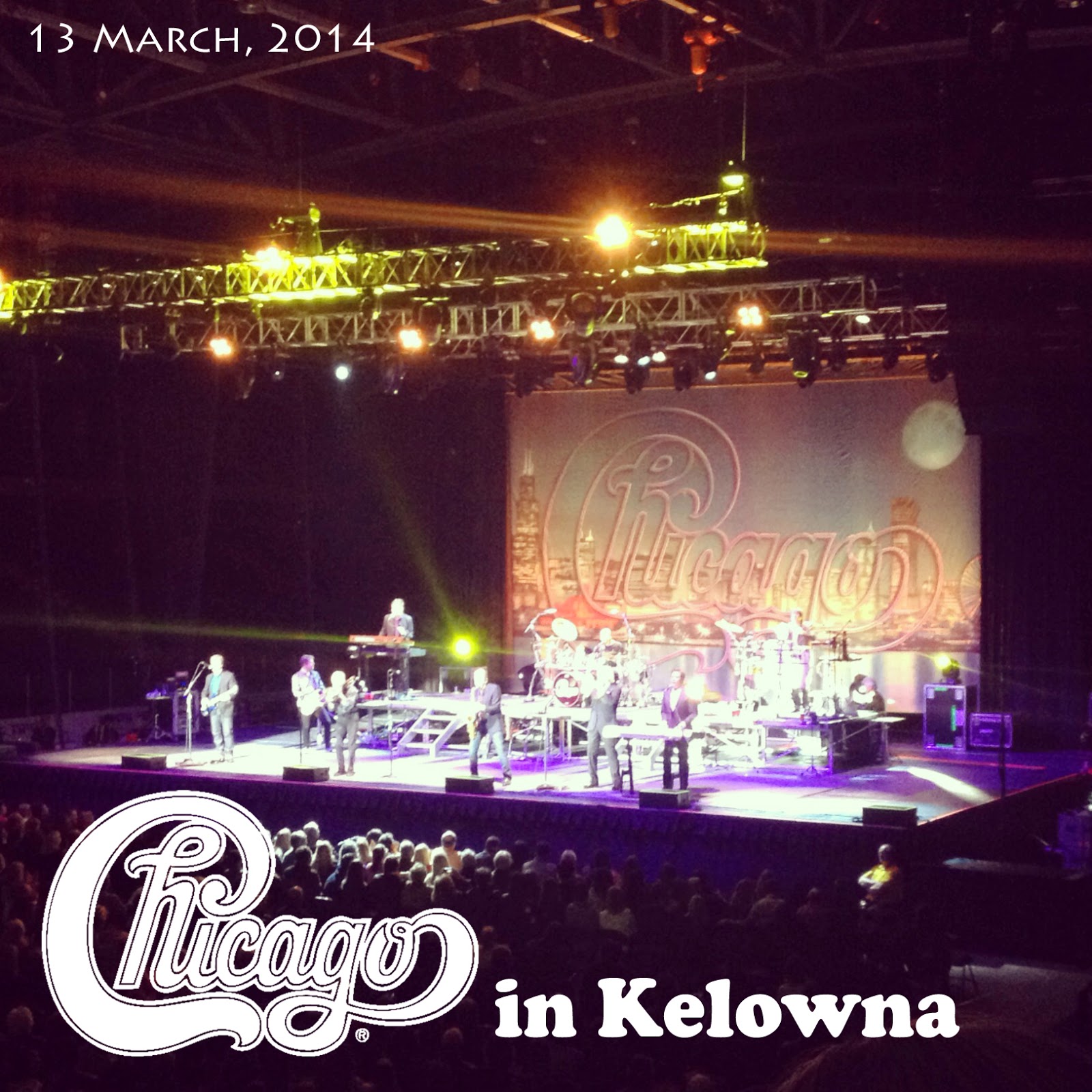 Back in my teens I listened to the band Chicago. I loved their music. At the time I think it was probably an odd choice for someone my age. None of my friends listened to them, and I don`t really remember them hitting the charts much in England but I think with lots of family trips stateside I must have heard them on the car radio and just loved their sound. My Dad used to get my their albums on cassette for me on his travels.

Fast forward 25 years. Last night we went to see them in concert. It was one of my birthday treats from Chris, and they were visiting Kelowna! And as I watched them I realised a few things;

I recognized around 50-60% of the set. And the rest was just great, easy listening - real toe-tapped stuff for me! I loved an evening of awesome music. Much of it has a great 70's feel to it - like a 70's TV show soundtrack (Charlie's Angels anyone) and the brilliant percussionist with his shakers and bongo drums created a real Tiki Bar vibe on a couple of occasions. It was fascinating to watch 9 talented musicians making music. We have so many brilliant musicians these days of course but the glory is often reserved for the vocalist and you don't often to really get to watch the people playing the instruments, actually making the music.

Besides I could listen to someone play Sax for me all night long.....
And for this old lady, it was a late night on the town. Now let me settle down with a nice cuppa cocoa....
4 comments:
Newer Posts Older Posts Home
Subscribe to: Posts (Atom)