So back in the day we used to travel around North America in Harvey. It was the travelling around for nearly 5 years that led us to Canada. When we eventually settled and bought our home in the Okanagan Harvey the RV took some much needed down time and sat out to pasture for a few years in a friend's field. Amazingly nearly 6 years have passed since that happened! And our poor old friend is showing the signs of neglect and his age (Harvey is a 1996 National Dolphin 36ft Motorhome).

After friends borrowed him last year for the summer he did make a small comeback and really importantly reminded us that there's life in the old boy yet! We had in mind that this summer we'd book him into a local campsite (just a couple of miles from home) and we'd spent a healthy amount of time chilling out down at the lake...

Because this is our view from the door! 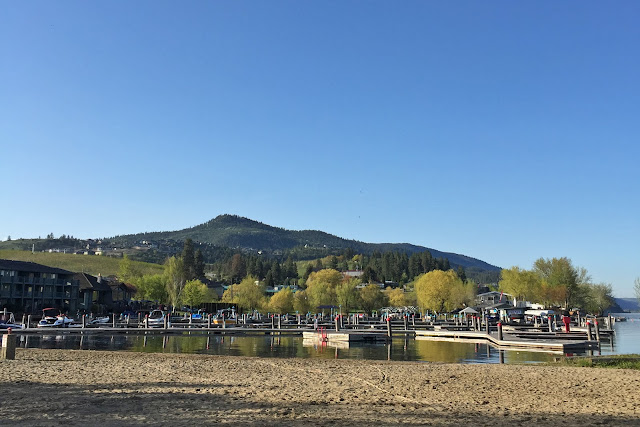 (best spot in the campsite right on the beach!)

Except things never really go quite as planned do they?!! Once on site we discovered that he hadn't been winterized properly and just about every bit of plumbing was leaking. Then that list of problems just started getting added to...I could give you a giant pity party list of everything that was wrong but honestly I'll just bore myself and start sobbing (again). We'd been told about a leaking toilet prior to getting Harvey back from the friends who'd borrowed him - unfortunately the fix they'd done involved a small glass bowl catching the drips and not a not else! But whilst fixing that issue we discovered a much larger issue - since the toilet hadn't been drained for the winter the water sat in the pipework had frozen and split the pipes. We didn't realize this till we turned on the water and the next day discovered a slow leak had seaped its way all across the bathroom carpet. It was this sodden carpet that was the catalyst in getting stuck in renovation mode.

(Note: Since Harvey is 20 years old we'd had various renovation projects on our radar for a few years, but had originally envisioned doing it at a slow and relaxed pace - nothing was urgent, just some gentle upgrades along the way whilst still enjoying spending time using him!)

So the carpet and underlay were ripped up and the floor cleaned and sanitized. We removed the toilet to try and fix it but new parts were going to cost so much that in the end we opted to treat ourselves to a brand new toilet - with the added bonus of replacing the dodgy cream version for a nice clean fresh white model. So.much.better. All the faucets were replaced and the leaks stopped - finally we were back in action with water - hurrah! (apart from the small issue of a split hot water - yes that too hadn't been drained so we were left with this... 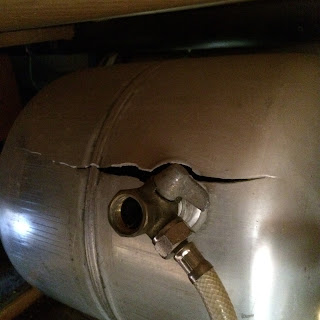 Yikes!! We've been able to isolate the hot water tank so for now we're just carrying on with no hot water - still figuring out a way to NOT spend $700 on a new tank)

I'm not sure at what point I ended up down the path of complete renovation but I think Pinterest must take much of the responsibility! Honestly I got carried away with pretty pictures, beautiful decor and clever hacks and tips to DIY reno' your RV or trailer!

So stayed tuned.....this really is our ultimate story of 'What Happened Next' (it's come full circle from the start of my blog writing days, of travelling for 5 years in an RV, life after travelling and now back with our same faithful friend getting his very own chapter of the story of 'what happened next!' - read the background story of my blog name here)
2 comments:

Our Valentine weekend getaway took us to a 'new-to-us' Canadian Territory - the Yukon! It was a fun little winter wonderland getaway. Of course we had in mind that travelling so far 'up north' in winter might give us a glimpse of the Northern Lights....as yet elusive to us both (after travelling in search of them a few years back to Iceland without success)...this was it - round 2 in the Aurora battle....*

Whitehorse is a pretty small town of around 37,000. It's the main city in the Yukon with over 75% of the population living there! Whilst it started off it's life caught up in the craziness of the Klondike Gold Rush, it's settled into it's current role as a main stop-off on the Alaska Highway. The highway was built in 1942-43 by the US Army after the Pearl Harbour attacks. It was handed over to the Canadians following the war and now it a major tourist route between northern BC and Alaska where thousands travel each year. Obviously not many of them travel the road in winter....and so Whitehorse is quite a sleepy little place in the off-season! But that's not to say we didn't have plenty to fill our time on our 3.5 day break!


We used Airbnb to book our accommodation. (and if you use this link to sign up for Airbnb you'll get a $30 credit on your first stay!) We spent our first 2 nights in the city and the second 2 nights at an incredible Mongolian Yurt about 1/2 hour out of town overlooking a frozen Cowley Lake. The Yurt wasn't just our bed for the night but ended up being a really memorable part of our trip! We arrived after dark and had a brief 1/4km walk through the trees and along a ridge line to get to the yurt on a well trodden snowy path. It was a clear night so we got a hint of what the view would bring us come morning - it was so exciting! Our host had the wood burning stove roaring away and the yurt was amazingly cozy and we immediately felt right at home. Come morning we stepped out onto the little deck perched right on the edge of a high ridge to a stunning view of the snowy mountains in the distance and an expansive view out over a frozen Cowley Lake.

We spent some time exploring Whitehorse itself - the city is quite compact and easy to walk around...we got lucky with the weather and had quite mild temperatures during our stay. We found some awesome little shops to explore - the Aroma Borealis was a lovely shop full of scents, potions and crystals - we brought home one of their unique essential oil blends. The Collective Good was another favourite - it was a beautifully curated design store of unusual and modern home decor, clothing, accessories and gift items with a great selection of local items but full of many others from all around the world - we'd been looking for some coat hooks for our mud room for the longest time and I was happy to find something a little different here! And we couldn't pass up the opportunity to get our 'outdoor store' fix! - we both could spend forever in a great outdoor & sports clothing and equipment store - Coast Mountain Sports was Whitehorse's answer to REI and MEC! Obviously it's a great outdoor adventure area and they have a fabulous store to service it! And of course we couldn't pass up the local brew - Yukon Brewing, where you can sample all their beers on tap! 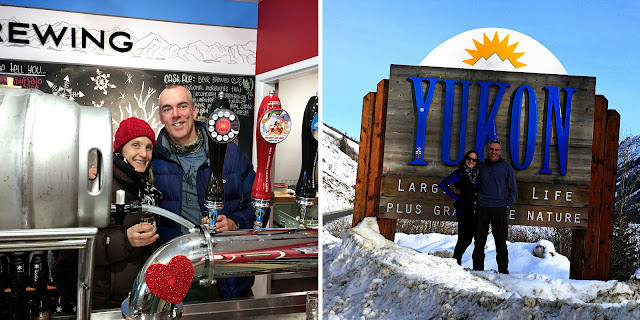 It may be small but Whitehorse serves up some top-notch eats! We loved pastries at Baked Cafe, Brunch at Burnt Toast, hot chocolate and snacks at Bean North. We dined at Antoinette's on our first night - a friendly and busy spot serving incredible Jamaican food with some wicked flavour and flare. We took our time over dinner, enjoying the house created cocktails and even managed to save room for dessert - squeezing in as much of the awesome food as possible! We picnicked in the yurt on our second night and on our final night hit up the Dirty Northern bar. We'd heard great things about their pizza and it didn't disappoint. 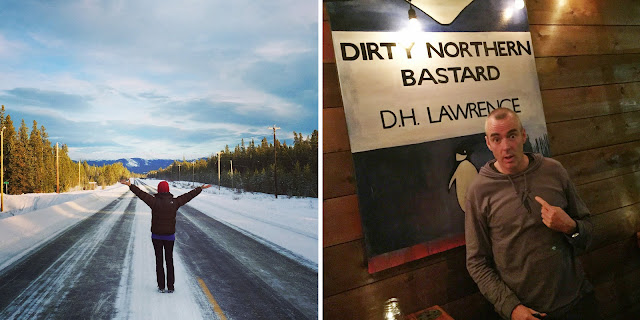 We lounged in the thermal waters at Takhini Hot Springs, visited the small but awesome MacBride Museum - I loved exploring the exhibits on 'ye old life' and socio-economic growth of the town - lots of stuff on the gold rush and rural outpost type life!  We took a 2 hour drive south to pop into Skagway, Alaska (where it was a totally different climate and not a snowflake in sight!). The drive south was stunning and we had gorgeous weather for it - blue skies and the crisp white snowy mountains as far as the eye could see, stopping at Carcross briefly en route!


Our final morning before our flight home we squeezed in a snowshoe hike across Cowley Lake - the snow was crazy deep so it was a healthy workout! Just as well as our journey home ended up being rather long and frustrating. Having flown via Vancouver all the way back to Kelowna, we were on finals with the wheels down before deciding the fog was too bad and they routed us back to Vancouver with a night in a hotel! Oh well, bonus day on vacation!! And a great vacation it was too!

*And whilst we caught a glimpse of the Northern Lights it was a little faint and shimmery pale blues - not the wild dancing greens you see in photos, and so for now I'm not quite 'satisfied' enough to check it off my bucket list and the aurora battle continues!
3 comments:
Newer Posts Older Posts Home
Subscribe to: Posts (Atom)