Last weekend hubby and I took part in our first* Tough Mudder in Whistler, BC. It was something I'd been looking forward to! The week leading up to the race though, not so much. I had some serious apprehension about some of the obstacles; the Arctic enema; the electric shock stuff, Everest and running through fire....I mean, seriously - what was I thinking??!

Spoiler Alert: I lived to tell the tale!!! 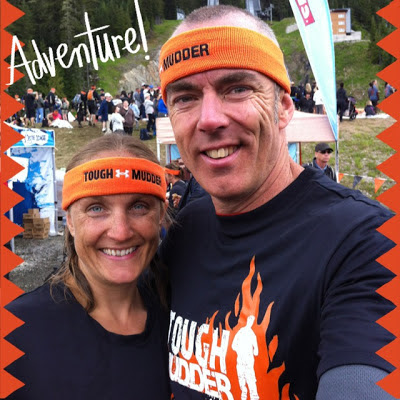 Chris and I only knew 1 other member of our team, and I think that was part of my apprehension. Of course the moment we all met up everything was going to be fine! There was 6 of us, and I think talking to other friends that took part in both larger and smaller teams than ours - 6 was a fantastic number - small enough to keep together and not spend ages getting us through the obstacles, but big enough to get us up and over some of the obstacles - I'm thinking specifically the Berlin Walls....

It had rained overnight, the ground was wet, and it was overcast but it never actually rained - with the temps in the late teens it was pretty perfect conditions! After getting on one of the 75 school buses drafted in to transport participants from Whistler Village to the Olympic Park 25 minutes south of town we arrived at the event site with time to check out the early starters coming through some of the onstacles, grab some welcome Clif bars and get our bag checked. Our team got going around 10am - and the first 'obstacle' was a 6 ft wall just to get into the start area for our  pre-event pep talk and national anthem! We were right at the back of the pack - just scraping into the area for our time slot.

Despite starting from the back of our wave I was pleasantly surprised at the minimal line-ups at each obstacle - no more than a minute or two, which was often a welcome break after running between areas and re-grouping the team (And to check out what exactly the next obstacle was!) That was another of my pre-event 'dreads' and again it was quashed as soon as we got going. There were 20 obstacles spread over a 18km route. There was more running sections than I expected - sometimes we'd be jogging along for 15 minutes at a time and then there'd be a quick succession of 2-3 obstacles in a short space.

At the end I was happy to have done it. In many ways the obstacles weren't as bad as I was expecting....I have a good level of fitness and stamina with my half marathon training which I do think helped tremendously. And once you embraced the mud and the filth of it all many of the obstacles were just about getting down and dirty. Afterwards people were chatting and asking 'which ones did you find hard?' I think for me it wasn't so much about being 'hard' as putting myself outside of my comfort zone. Jumping over fire isn't hard  but perhaps just something I'd prefer not to do every day!! The Arctic Enema wasn't hard it was just f**king cold, uncomfortable and something I'd probably die from if I wanted to do every day. For me, a better way of putting it perhaps.....the 2 least pleasurable obstacles of the event - that arctic enema (am I going on about it d'ya think??!!) and the electroshock therapy - which was bloody painful and I'm thankful I was one of the 'lucky' ones that didn't get shocked so bad I got knocked to the ground! The Monkey Bars were 'hard' but after testing out my grip, and realising the absolute lack of it, I just hurled myself merrily into the cold pool below to give myself the best head start possible on my swim across!! I surprised myself at 'enjoying' the trench stuff - whilst I'm not really claustrophobic I wasn't overly looking forward to them - especially when some were flooded with water - great - small tunnels AND frigid water! But everything becomes relative - and the water in those trenches was 'warm' compared to others! 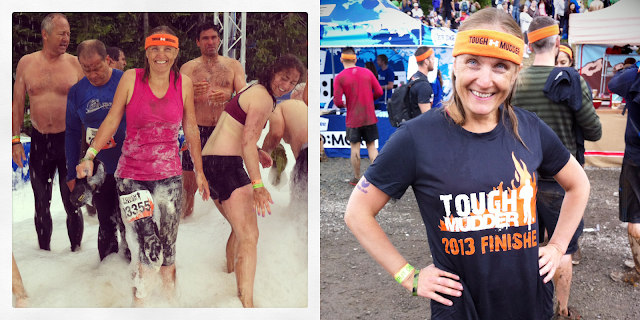 Would I do it again?! In some ways I think I'm not overly bothered. Definitely not because I didn't enjoy it, but because I've done it. And seriously I have no desire whatsoever to jump in icy water again and get electrocuted. A second time I'd have to deal with the 'known' rather than the 'unknown' and I know I don't like them. BUT. The teamwork, friends and camaraderie is what'll bring me back next year. And we've already got people inspired into signing up next year. So yes, this was my *first Tough Mudder!!

It's Friday, and I'm linking up to Jill's Fitness Friday

I did it! I ran 2 Half Marathons in 7 days, one of my fitness goals for this year is done and I'm now Half Fanatic #4393. Very pleased - I set a goal, and achieved it. In fact 2 BIG goals/achievements checked off in 7 days - the first being my Sub 2 hour Half last weekend and getting my Half Fanatics status this weekend! 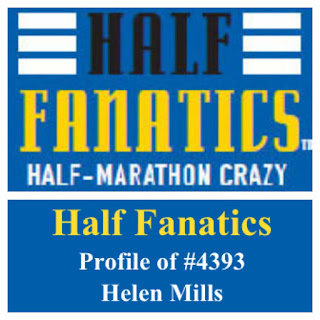 Since it was a Saturday race we set off from home early on Friday morning for our 6 hour drive to Whistler and The Whistler Half Marathon. I love Whistler! - as we got closer I was so excited for the weekend - not just the race but the whole weekend away / mini vacation in a lovely resort. The snow has long gone but the resort is already buzzing as a summer resort for downhill biking. We quickly met up with friends already there and headed out for a late lunch and a few drinks....which then lasted all evening!! It was a bit of a appy/liquid bar crawl really! Great fun, but I was constantly aware that I was running for 2 hours the next morning!! (Whoops!). I have to say at this point that I had never planned this to be an overly 'serious' race for me - it was about getting Half Fanatics status, having fun and a jolly weekend away with friends (and seriously I was perfectly happy to walk if necessary - I had no idea in advance how I'd be feeling so soon after the previous Half Marathon) Then after my success last weekend I was even more disinclined to worry about performance. So I was not actually that concerned about the less than ideal pre-race nutrition and hydration techniques!!

The race was head sponsored by The North Face so our race goodie bag contained an awesome technical t-shirt (girlie fit for me!), a water bottle and sun visor. Cliff Bars were also big sponsors so we got plenty of samples of their protein bars, gels and bloks. The expo was pretty small - mostly advertising other local races but it was a nice vibe. (I mean this is vacation central - the vibe in Whistler is just awesome!) OH, and talk about awesome - my bib number was 374 (my birthday is March '74!! - how cool!)

After a glorious day on Friday we woke around 5:45 on Saturday morning to a grey dampness. Luckily it never actually rained during the race, but the course was wet after some rain overnight. Everything in Whistler is super close so it was just a 5 minute walk from our hotel to the start line. Chris and our friend Les were both running the 10km which unusually was starting before the Half Marathon at 7:30. We arrived there with just 10-15 minutes to spare. I saw them off then headed for the obligatory toilet stop before lining up ready to go. 20 minutes later we headed off.

I have an uncanny knack of selecting flat courses usually so this was the hilliest I'd encountered! We had one particularly brutal hill lasting about a mile just a mile into the course. I'd given myself absolute permission to take things easy in this run, and to walk when I felt like it and enjoy, take photos - whatever. When Chris was asking what I was planning on time-wise I'd estimated around 2hrs, 10-15mins - I really had no expectations other than to enjoy the scenery. Overall though, despite being held in a Ski Resort it was less hilly than you might think. There was that one early brutal hill (which I did manage about 2/3 of, before I started walking!) and another biggish one around mile 4, but mostly it was undulating, gradual hills around gorgeous resort home neighbourhoods, golf courses and parks. Whistler also has an awesome network of walking and cycling pathways and we made use of them on several occasions. It was an open course but the volunteers did a great job of keeping the traffic at bay, and us safely behind cones along the edge of the roads when we were on them. I just remember lots and lots of lovely green pathways, and very little traffic! We ran along the edge of Alta Lake with Whistler and Blackcomb mountains towering above us, reflecting in the water....there was an aid station in the middle of a lakeshore park - it was tough not to stop, sit and reflect for a while - talk about great views!!

I felt great all through the race. I really did. I walked a few times on the 2 big hills, maybe once more, just to take a 'time out', chatted to a couple of people along the way, thanked volunteers as I went, and had a great time 'people watching' my fellow runners! I settled into a groove with the same handful of people around me for much of the race and just ENJOYED the moment.

I was surprised and delighted to cross the finish line in 1:57:37! Seriously!!! If it hadn't been for my whopping PR last weekend I would have been giddy excited with that sub 2-hour! And, don't get me wrong - I still am! But actually I felt like I'd cruised it a bit and still managed that time! That was with hills and some elevation (actually Whistler village is only at 2200ft so only about a 1000ft above my 'normal')

Post-race was fun - some great live music, toasted cheese sandwiches (with the North Face logo branded into them from the toaster!), more protein bars, fruit, bagels and (the best bit!) - Ritter Chocolates (I may have taken more than my fair share!!). We stuck around for a little while but since Chris and Les had finished their race some time earlier, been back to the hotel and showered I was smelling the place out a bit and the vote was breakfast! In the end it was more like a brunch and a celebratory Bloody Mary for me!

I have figured out the most perfect post-race afternoon. It's called Scandinave Spa and it's in Whistler, BC. Seriously this place was the perfect way to spend 3 hours on Saturday afternoon. It is a beautifully landscaped outdoor area with cold and hot pools, saunas and solariums  a fire pit and hammock area and sun terraces. Basically you go through repeated sequence of 15-20 minutes in a 'hot' zone - be it a sauna or hot pools, then a quick dunk in one of the 'cold' pools, followed by 20-30 minutes of relaxation on the terrace, in a hammock, by the firepit or (our favourite!) the solarium (where we'd snagged some of the comfy 'lie down' beds and nodded off!) Then you repeat. And repeat. And you may never want to leave.

But after a second awesome night in Whistler, eating at the excellent 21 Steps restaurant (And I did count them - there were 21 - it was an upstairs restaurant!!), it was time to say goodbye (for now - we're back in Whistler in 3 weeks time for Tough Mudder!)