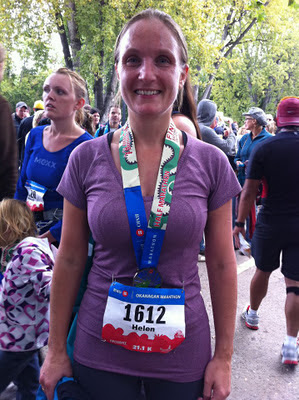 Sunday I ran my second 1/2 Marathon.

Saturday I was all jitters and nervous. After having been completely cool, calm and collected about running 13.1m (in one go!) this year it crept up on me and the day before I was full of mixed feelings. Last year I had nothing to prove - I just wanted to complete it. This year I had a benchmark. I had done it before, on the same course and I had a time to beat or fall short of. Since training this year I was consistently slower than last year, I carried around several extra pounds for much of the summer and despite all my best intentions I never really got out there and did any true speedwork as part of my training....so things weren't really looking good. And a sweet debut time of 2:04:39 from last year was a tough one to live up to.

Sunday dawned cloudy, grey and a bit drizzly - so even the conditions were pretty much an exact replica of last year! Temps were around 12 degrees and I've become quite fond of a little drizzly rain to keep me cool :-) I was all in a 'kerfuffle' when it was 1 minute to the start, they'd finished singing the national anthem and I was still waiting for Chris at the porta potty line. We rushed to the start corral where I was right at the back. I'd wanted to be nearer the 2hr pace bunny but that idea was long gone and I hurriedly handed over my bag to Chris and said a teary and panicked goodbye - I just didn't feel ready or prepared.

Of course I was all OK once I got going, and I settled into what I know I can do and love. I admit I completely ignored those final words from Chris to not try and catch up any of the pace bunnies and sped through the crowds and popped off the 2.30 and 2.15 bunnies within the first couple of kms (after all so I should - I didn't want to be behind them!) I knew I was going a fair pace (read too fast) but I felt so great I just wanted to see where it would take me. Note: I always vehemently maintain I do not have a race pace. I have pretty much always ran the same pace regardless of distance or circumstance. But today I was pushing it a little harder for a little longer and it felt OK.

For this race I'd been begrudgingly lovingly lent Chris's iPhone so I could use the Nike+GPS app to monitor my pace. Every km it told me my distance, elapsed time and average pace. I loved having it! and it was truly so helpful to better keep track of how I was going (since I am lousy at trying to gauge a pace otherwise!)

I passed over the timing mat for the 10km distance in 55mins and 20 seconds! A new PR for the 10km for me - I was stoked! And was still feeling awesome!

Really I felt great for most of distance. My pace was slowly slipping each km but since I'd started out at a 5:26 that was hardly surprising! I was beginning to realise that a new PR was possible and the extra push I'd found for the day was carrying me through. That last 4-5 kms got tough but by then it was the home straight, and I knew I could keep it going long enough to do it!

All I needed to see in that finishes tunnel was a time on the clock less that 2:04:39 - that was last years time and I knew I'd crossed the start line some way after the gun went off. The time was showing 2:02 something - I'd done it! 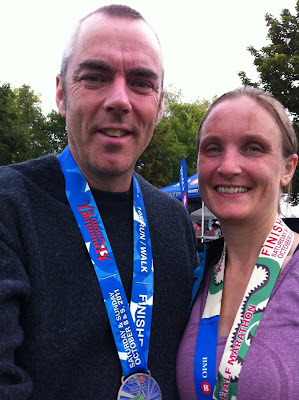 But enough about me.....I was also thrilled to cross the finish line and find Chris in the crowds and find out about HIS race. He's only just started training again (ok so I think he's been to the gym 3 times so far!) so entered the 10km - and finished in 46 minutes! Un-flippin'-believable awesome job! Also a relief to hear the calf pain he's been suffering from lately hadn't flared up for the race.

It was a well deserved lardy lunch all round! After heading home to shower and freshen up we went off to a local pub to replenish as many of those calories (and then some!) as we could!!