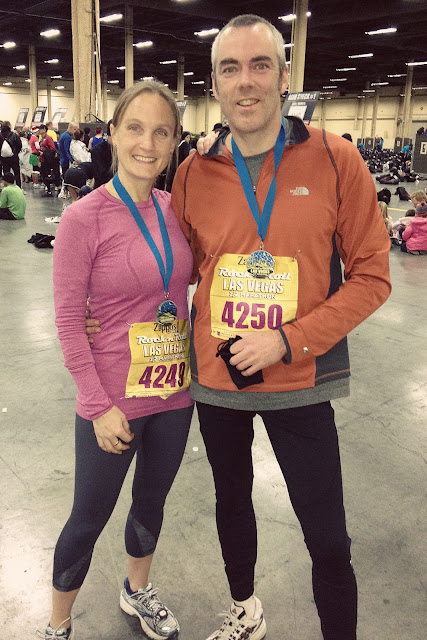 (and if you read too many race reports about this one you'll understand that could have been an achievement in itself!!)

2:17:00 - Well it certainly wasn't a record breaking time, but I never expected it to be. But the important thing for us was that we had a blast! We totally rocked the strip at night at the 2011 Rock n' Rock Las Vegas Half Marathon!

We got back from our mini vacation late on Wednesday night but the run itself happened Sunday evening - starting at 5.30pm - so yes completely dark. What I wasn't really anticipating was how flippin' cold it was. It was more the biting wind that really kept it chilly. The race was crazy busy as we anticipated - 44,000 people will do that! I ended up slipping an extra layer under my running shirt and never once regretted that move. It got a little better once we were huddled into our corrals at the start line - I don't really think that 1000 people should have been in that small a space but the body heat certainly helped whilst we waited for our wave to cross the start line! 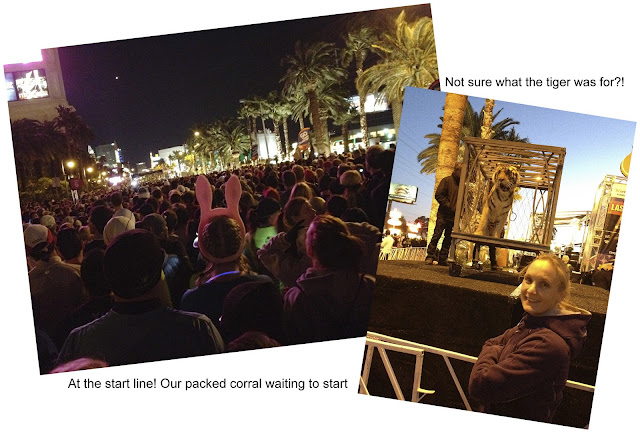 Once we got going it was a fairly steady pace - a little slower than I'd normally set off, but later in the race I think it was a wise (if unintentional!) move! It wasn't as light/bright as I thought it'd be, but it was awesome to be running along such a famous stretch of road, completely closed to traffic for the evening! The bright lights of all the casinos were all the light we had. We passed the Bellagio just as the fountains were going, and I may have glimpsed a volcano erupting too! At the northern end of the strip we looped around a little through the 'older' downtown area - I know it's undergoing lots of regeneration plans now, and certainly Chris and I visited Fremont Street in a past trip (Which is awesome!). There were less spectators in this area but what they lacked in numbers they made up for in enthusiasm! I'm not sure if they were an 'official' band on the course but some of the best music I heard on the way was up near Fremont Street with little set-up and speakers blasting out their tunes!

The last 5 miles I was cruising. I'm curious if it was the slow steady start or that I tried out fuelling with Gu for the first time during a long run (always been nervous about what it might 'do' to me and my digestive system, but with this race I felt so relaxed and pressure free I didn't really care either way!). It was a first for me to be encouraging Chris along  (bless him, I think I may have forced the 'old' man into this a little - what with his injury and complete lack of training and not having run the distance in 15 years it was quite the achievement for him!) I loved running with him, and excited for me to have felt 'so good' later in the race - it was a great learning curve for me.

So onto the 'fiasco' that was the post-race. Actually NO. If you want to read about that go elsewhere (you won't have to look too far). WE had an AWESOME race. There was 44,000 people - it was always going to be busy and hectic and crowded. It was nothing more than I'd expected. Post race we got our fabulous chunky heavy medals, a Mylar blanket (Which heck did I need!) plenty of water, cytomax, granola bars, bagels and bananas (which I will concede to the mass complaints, were a little green!). We hot-footed it inside the convention centre to pick up our bags and change into some warmer, drier clothes and then started walking up the strip to eat, then back to our hotel. The bag check (though badly signed) was very organised - and the plus points was our low corral & bib numbers meant our bags were right up front!!
The expo prior to the race was awesome too. I'd never been to a 'big' expo before but we just strolled around picking up freebies and samples left, right and centre (hey, I'm always a sucker for freebies!). I also got to listen to the ladies from 'Run Like a Mother' present a short talk on the stage and we got our snazzy race tees - love that they had womens sizes (now I just need to wait till next spring before I can wear a short sleeve shirt again!)

Vegas itself, well, what can I say?! It's bright, bold and brash but it always entertains me! We strolled for miles, ran for miles, actually didn't do that much shopping (I know?! shock!!), but took in the Criss Angel Illusionist show at the Luxor, along with the Titanic exhibition, a gluttonous Champagne Brunch at the Bellagio and altogether way too much eating and drinking (and seriously $16 for a cocktail ?!)

That saying 'What happens in Vegas stays in Vegas'? - I'm just hoping that applies to calories too!