Oh boy, where do I start?! This time last week I was still hobbling around in Chicago on my runners high, having completed my first (and last*) marathon.

This week I'm still on my runners high, but without the hobbling! (and back at home in BC)
Chris and I flew to Chicago on the Wednesday beforehand, where we were met by my parents who'd flown in from England. My Aunt and Uncle from SoCal would be arriving the day before the race - nothing like having the BEST cheer leading squad on hand for the big day ;-)

We went to the Expo on Friday morning. Got my race bib and bag and just strolled the expo. My folks had great fun sampling the energy bars, chews and drinks (not so much come 4am the next morning when they were still buzzing from the caffeine and energy spikes - ha!) I was happy with what I knew for the race itself (but no harm in sampling right?!). Found my name on the 'wall of fame', got my personalised message from Nike, and got a running gait analysis from Brooks (who tell me I'm in the wrong show - great! - it ain't changing now buddy!). Once all done, we left with a real sense of 'countdown' going on.....

It's nerve-wracking. All the build-up. The waiting. The anticipation. The fear. The what-ifs - particularly the what-if's (they're my speciality!). Bottom line (which I may have needed reminding of from my coach aka my husband frequently in those preceding 48 hours). It's just a run.  And in fairness I was at a point where I wasn't treating this at a super serious race. This isn't my distance. It was about the accomplishment of getting to the finish line. Heck no, it was about the accomplishment of getting to the START line! I'd come so far in my training and was always spurred on by this quote;


"I've learned that finishing a marathon isn't just an athletic achievement. It's a state of mind; a state of mind that says anything is possible." - John Hanc (running author)
Oh Yeah! And besides, if I got to the finish line I was guaranteed a PR!!! ;-)

I think there were around 40,000 runners at the start line come Sunday morning. A fairly fresh, grey, breezy Sunday morning. Temps were around 8 degrees, with a high expected to be around 11. Chillier than I've been used to of late that's for sure. What to wear?! Ahhhhh! Seriously I think I was looking for things to fret about. And I'd packed for all weather eventualities so in the end I went for capris, short sleeved tee and arm warmers. With my windbreaker running jacket. Oh, and a brand new Walmart special dashing bright pink throw-away sweatshirt (that's what comes of having your Mum coming along - she was worried about her little girl getting cold! - thanks Mum xx)

It was weird and slightly fraught having to say my goodbyes to Chris and Mum & Dad at the gate. Only runners were allowed into the start area in Grant Park. I wasn't checking a bag so I sorted out my stuff, handed off what I wasn't running with to them, downed my pre-workout energizer drink and set off - in the direction of the toilets (of course) And BRAVO Chicago organizers - you are my heroes - ONE person in front of me in the queue with 5 minutes to the cut off time to get into your corral. Is that some sort of amazing miracle!?!

I was in the second corral of wave 2. I had signed up for a pace bunny team, but they were further back and I didn't want to switch backwards, and besides, I'd never paced before so why start now? Almost as soon as I got into the corral they closed the gates behind me and we started slowly moving forward. It was still 15 minutes to the start of Wave 2 but I guess we were bunching up a bit. We ended up crossing the start line a little over 3 minutes after our start.

I was super conscious of setting off slow. After the first mile my Nike + GPS told me I'd done an 8:30 pace - yikes - way too fast for me. So I reaaallly tried to drag my heels. By the second mile it hadn't slowed much but I also realised the GPS wasn't corresponding much to the official mileage signs. By mile 5 it was 1/2 mile out and it was around here I gave up paying any attention to the darn thing. I think it might have taken the hint coz somewhere along the way it stopped talking to me at the mile markers. Which was a good thing. 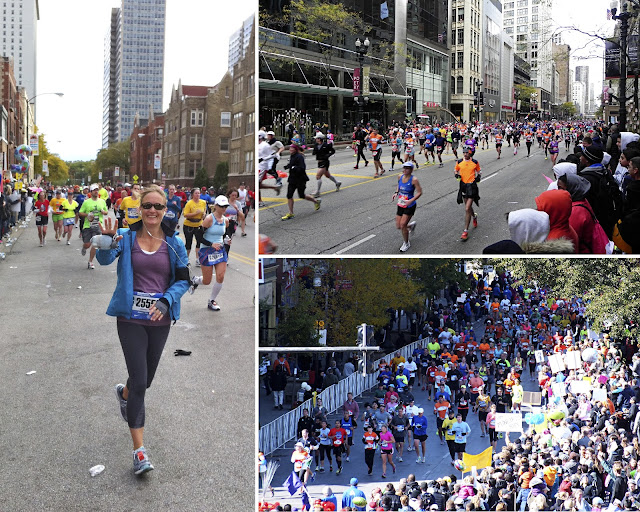 I'd never really run without some indication of how I was doing. I don't wear a watch so it really was a first 'naked' (sans electronics) run for me. And you know?, it was just fine. I had my music but I kept the volume low and soaked in the crowds and atmosphere. There were reports of up to 2 millions spectators - it certainly sounded like it!!

I kept my earbuds in, so Chris was able to call me once my cheerleading squad had got into position. He'd tell me the mile marker, possibly a landmark or cross-street and the side of the road they were on. This was brilliant. It gave me something to look forward to - to see their smiling faces cheering me on. And it was SO important to me, that I saw them, and they saw me (after all they'd travelled all this way for me, and for this) I never missed them. (Difficult since they were wearing Union Jack bowler hats and waving red, white and blue balloons!!) I think I saw them 4 or 5 times along the way. Chris tells me, they probably banged out at least a 10km themselves that day with all the jogging around, on and off the transit!!

Things got tough in the late teens (well, duh, I guess I'm hardly special there!) All my runs in excess of around 18miles have been hard. But not in terms of cardio - just really, really heavy legs. I had a happy moment coming through Chinatown with a bunch of oldies on the sidelines dancing Gangnam Style - that song always makes me smile and they were just too funny!! Apparently I was looking a bit beat up at this point according to Chris when I passed them just at the Chinatown Gateway. The pace bunnies from way back started passing me. Some of them I was expecting. Around mile 17 the 4:25 bunny came bouncing up and I tried to stick with him. I did for maybe 5 miles, but eventually had to let them go if I was going to finish without walking. At that become my goal. To finish without walking. And boy, did I ever want to just walk for a few minutes. 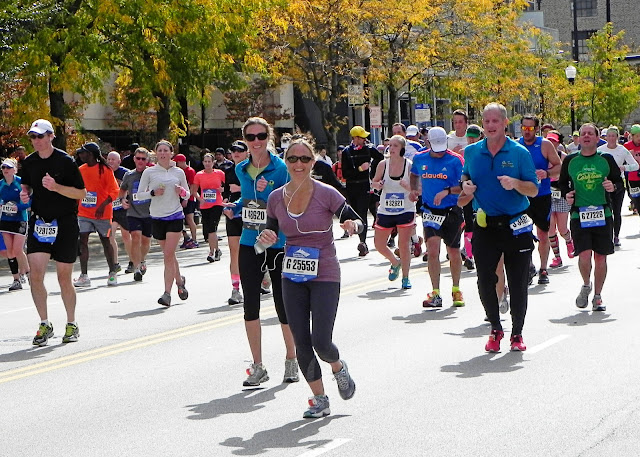 I saw the cheerleaders for the final time at mile 25. Even then I was seriously contemplating just a 'little' walk. I'm not honestly sure at that point that my run was much more than a walk anyways!! But it my mind there was a big difference! And just when I realised I hadn't heard my current favourite song on my playlist right now (Call me Maybe) it came on, and helped push me on with a final surge to the finish line. 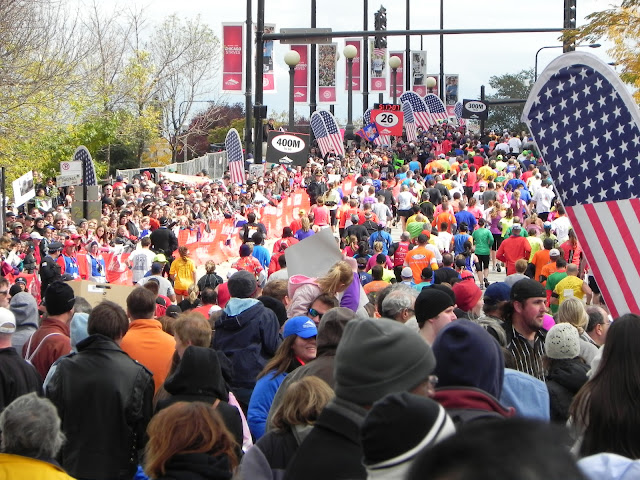 And then it was there. The finish line, and whoosh. It was all over. 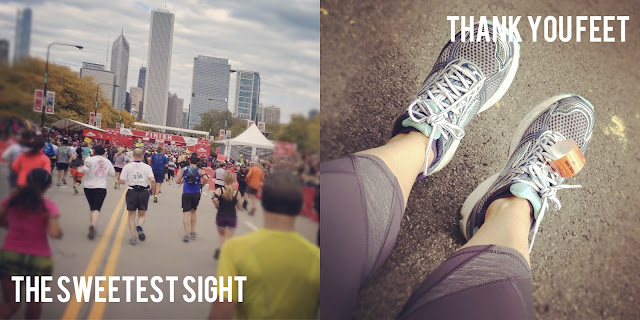 And it is all over. It's quite emotional really. So many months of training, and build up to this moment. And in 4 hrs, 34 mins and 38 seconds it was done. I'm so, so proud of myself. 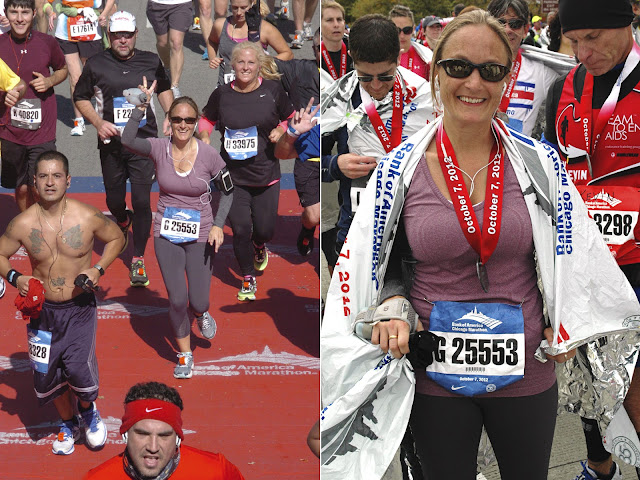 *They say running a marathon is like childbirth. Once the memory of the pain fades it doesn't seem like such a bad idea after all. And so on that note I am never saying never (you heard it here first!)