Last month I took a fantastic trip to Halifax, Nova Scotia. It was a work trip but Michele (my work colleague) and I managed to cram in a good chunk of sight-seeing too!

We stayed right downtown Halifax at the Four Points - it was 1 block from the water and I had a teeny glimpse of the harbour from my top floor room. We arrived late on Monday after a long day of travelling but we headed straight out and enjoyed a nice stroll along the board walk and into a couple of different pubs for drinks before settling down at Salty's for a classic Atlantic lobster dinner over-looking the harbour. (well Michele did - I don't even like lobster - I know - wrong province right?!) 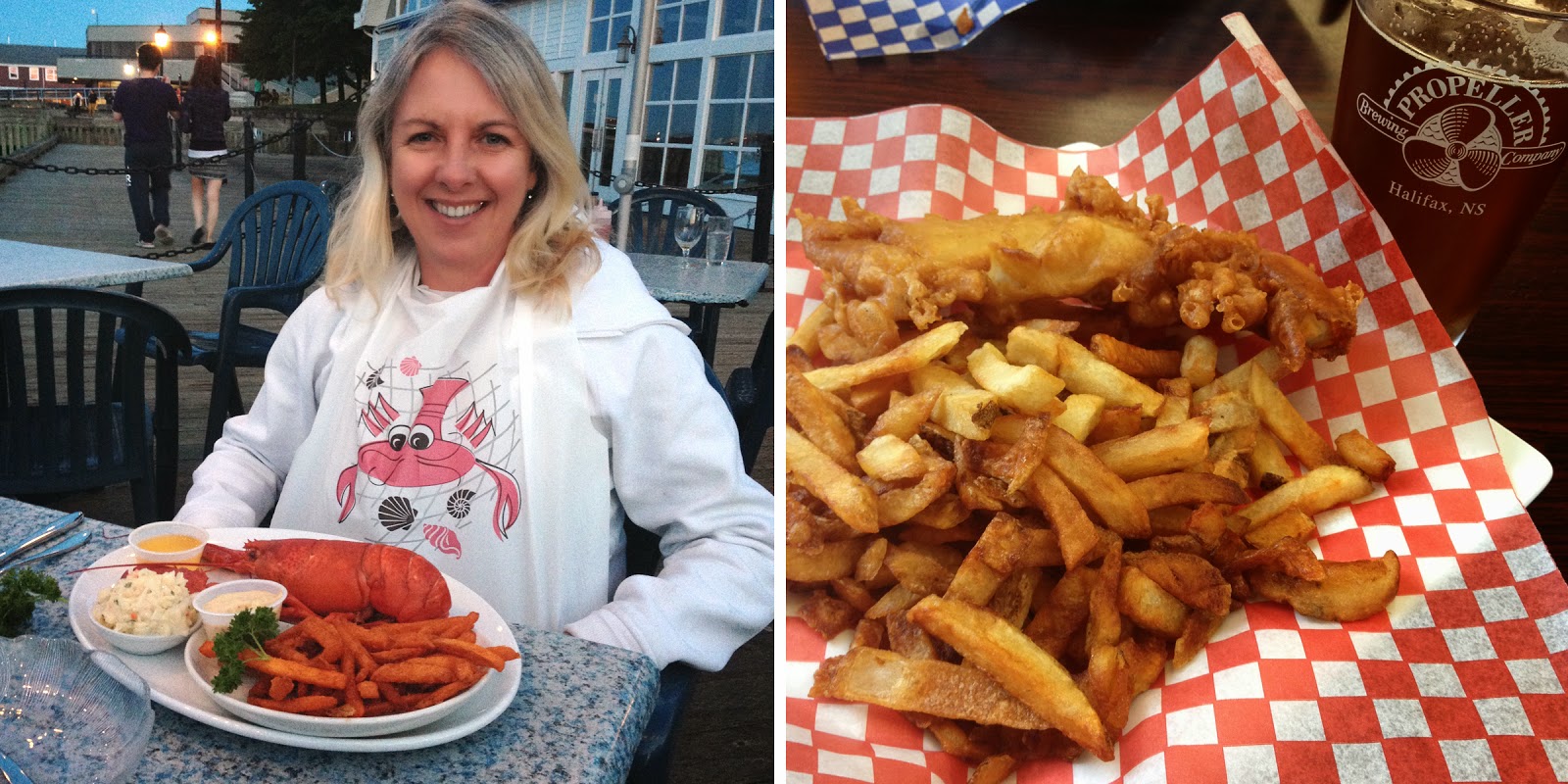 Tuesday was a glorious day weather-wise. We worked in the morning but wrapped up our work day early enough to head out for the some sight-seeing. We hopped in the rental car and took the long scenic route south out of the city following as much coastline as we could get. We made a brief stop at the York Deboubt Historic Site - built in 1793 on a bluff overlooking the harbour entrance it was a windy stop, and not fully open for the season so we didn't stay long. 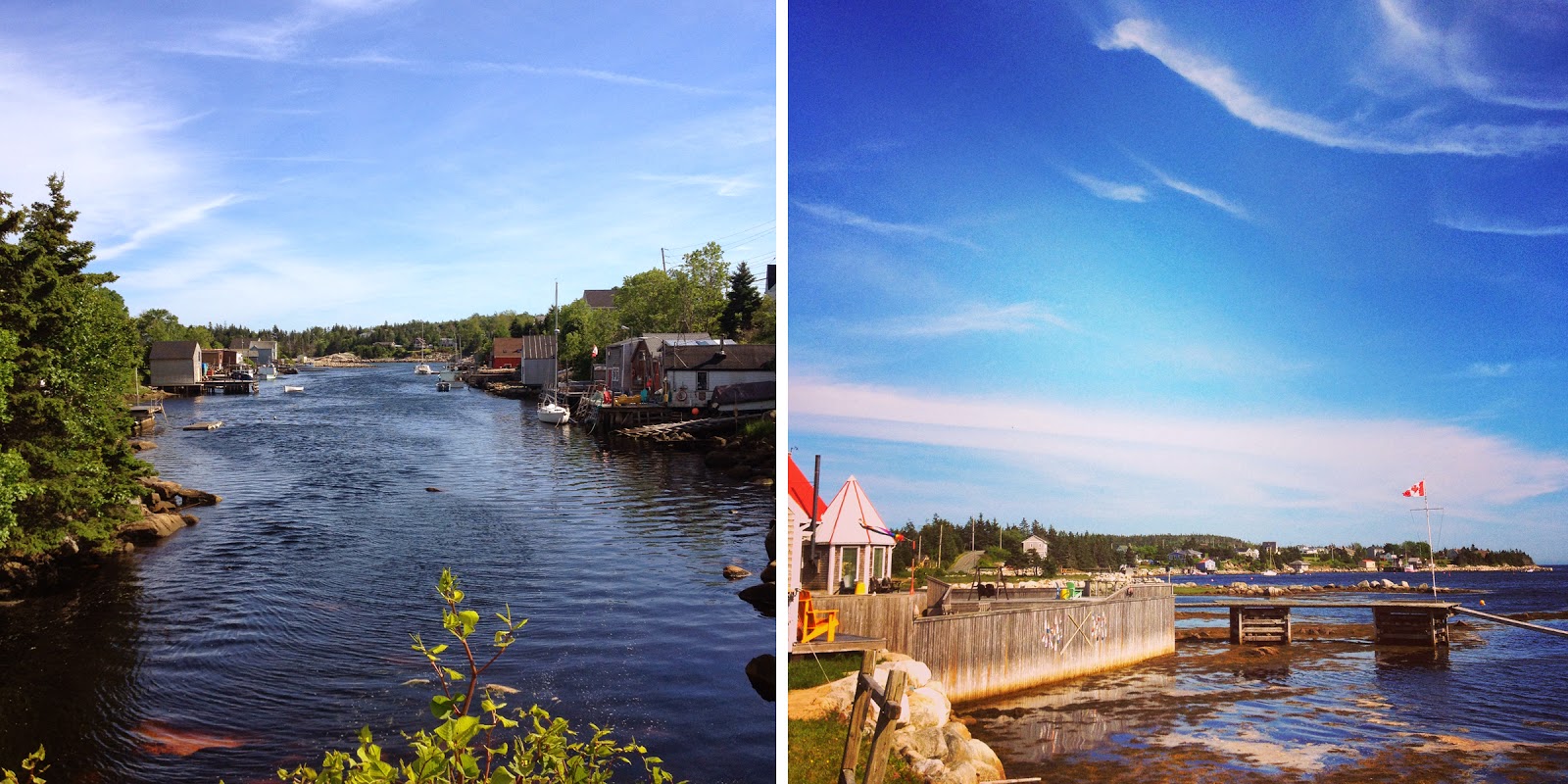 The road took us through a number of other small communities - Ketch Harbour and Prospect all the while clinging on to the gorgeous rugged and rocky coastline. These little villages were smaller than I imagined and less touristy and developed - I was expecting gift shops, B&B's and cafes galore but for the most part they were quiet and unassuming places that looked like they were just going about their regular business and hadn't catered to the tourists at all. We made it to the infamous Peggy's Cove and lighthouse. It's a sight featured on many a calendar here in Canada!! It was later in the afternoon so the little fishing cove was deserted and the few art galleries and shops here were closed for the day but it gave the place a rather peaceful feel for us strolling  around. The lighthouse itself sat on the edge of the rocks right on the edge of Canada, waves crashing around it - we hopped the tide pools and rocks to reach it and admire the view of that big bad Atlantic ocean. 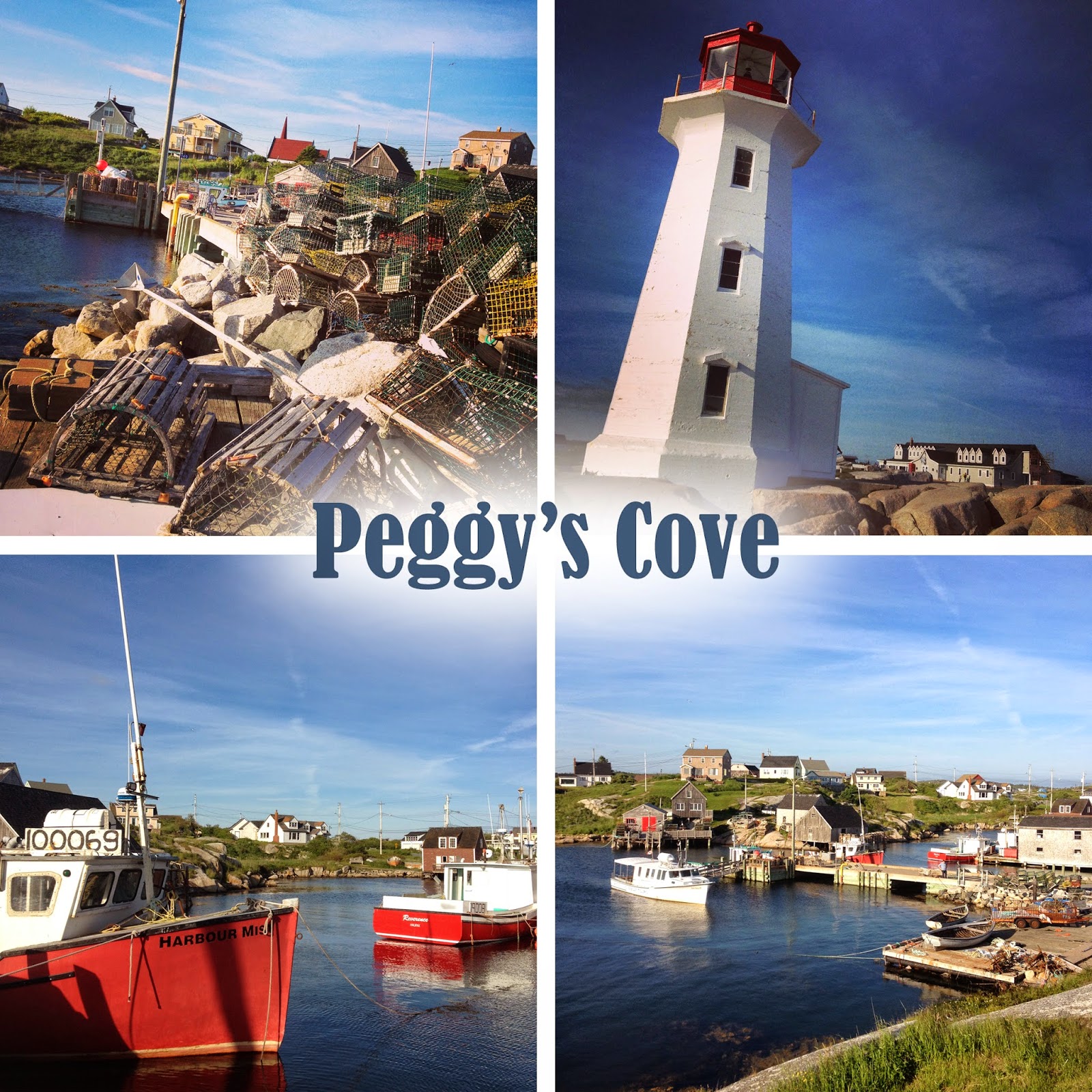 Wednesday morning I got up before work to head out on my sight-seeing run. I've started to really look forward to going for a run when I'm travelling - getting in my workout AND seeing the sights of the town! Bam! Killing it with the time management there! I used MapMyRun to scout out a route along the waterfront boardwalk (past some funky installation art - are those lamp-posts drunk?!), through the commercial docks to end up in Point Pleasant Park. Oh man, what an awesome park - it reminded me a lot of Stanley Park in Vancouver - lovely wide gravel pathways around it's circumference and cris-crossing through the park with a myriad more smaller trails through the forest. I headed out of the park, through the Spring Garden neighbourhood and to the Citadel - a short, sharp hill climb got me to the top where I could run the perimeter and enjoy some wicked views of the city. From there I headed back along the waterfront to the hotel and had clocked 10km for my troubles - such a great start to my day! 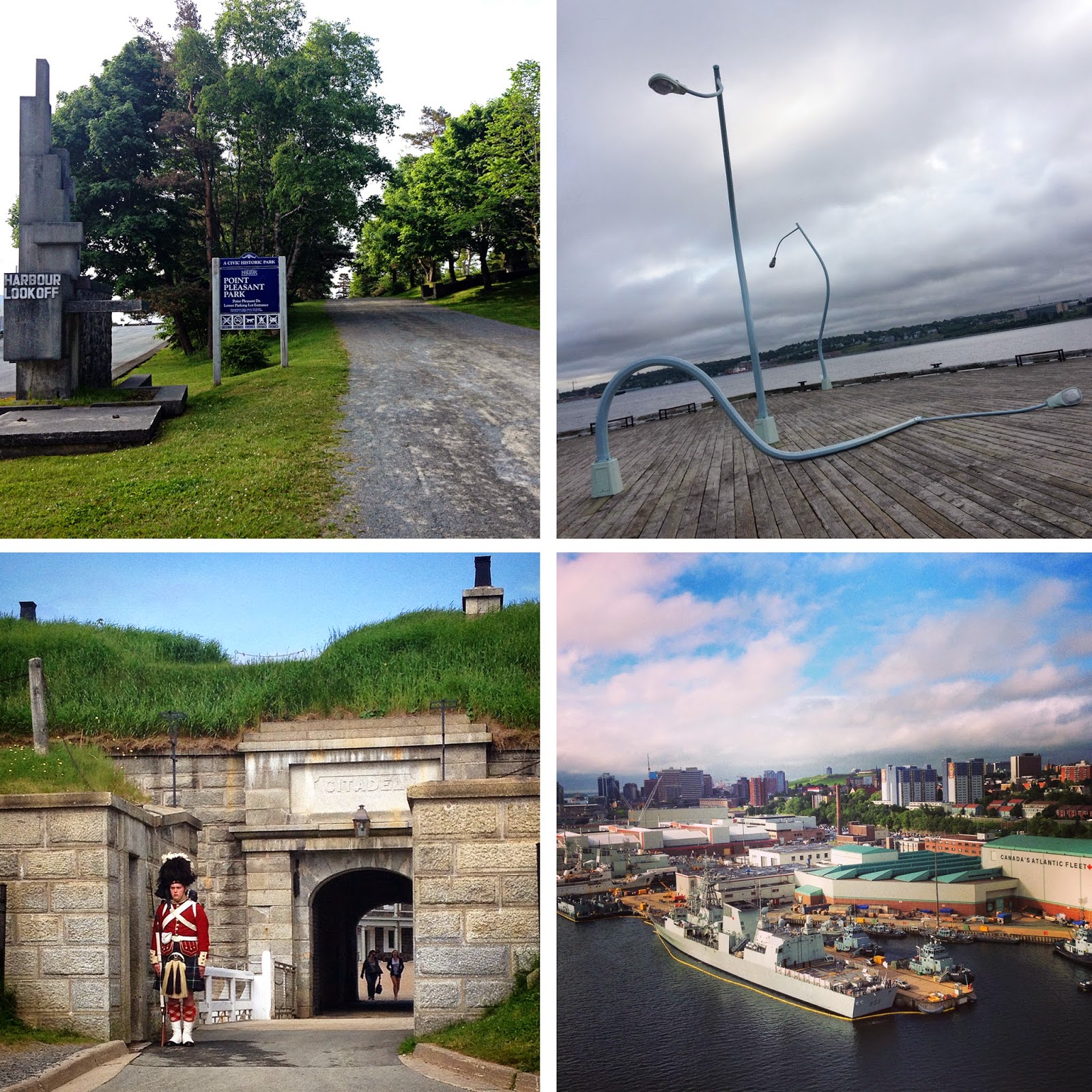 Thursday Michele and I had put in a vacation day so we headed back down the coast for Lunenburg. The weather was lousy - crazy torrents of rain which made for a sad, wet drive. We stopped briefly in Mahone Bay but really just cruised through town a couple of times admiring the views from the comfort and dryness of the rental car! Finally when we reached Lunenburg the rain had mostly let up so we could spend a couple of hours strolling around the town without looking like drowned rats!

We explored the very interesting little Knaut-Rhuland House Museum - where we had a personal tour guide who explained how the town was settled by the British - there were great incentives to encourage people to settle here - including a plot of land and some animals - each person arriving would draw a card to set what lot they were being 'given'! These days the town is a UNESCO World heritage site and is full of delightful old, cheerfully painted buildings and is a perfect place to just stroll around (even in the rain!) 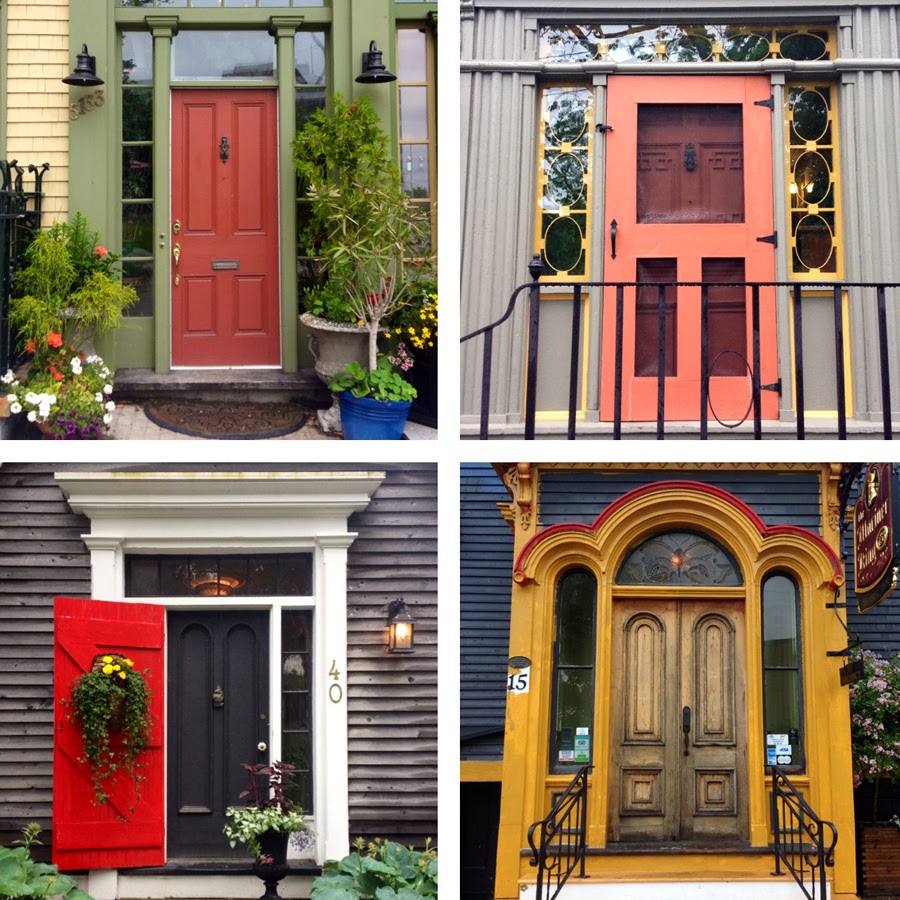 I got in a final run on Friday morning before our flight out. This time I headed out of the city, over the main MacDonald bridge and across into Dartmouth. I ran along the water separating the cities of Halifax and Dartmouth. Much of the route seemed pretty industrial and at time perhaps a little sketchy and I was seriously questioning my sense of direction a few times, but Google maps is my friend and together we made it (as per my plan) to the Woodside Ferry terminal - part of the city's transport network it was a $2.25 fare on the water taxi back to the wharf in Halifax and 2 blocks from my hotel. Quite the adventure and some great views of Halifax from the bridge as I crossed the harbour.

I was quite taken with Halifax! I'm kicking myself for not sneaking Chris into my suitcase for this trip - he would have loved it! The city seems very funky and forward - the calibre of restaurants and eateries is a notch above Kelowna. We dined at some real gems - including a Vegan restaurant (which had a big picture of a vizsla on the wall so they got my vote even before the food turned up!!), an awesome place called 2 Doors Down who source mostly local produce, and an incredible fish n' chip place buried in the middle of a residential area but agreed upon by all we asked to be the best place going for classic fish and chips and the beer...oh the beer!! I only seem to drink beer when I'm travelling and then I turn into some craft brew drinking beer monster - and I really I love every minute of it - Propeller, Garrison, and not forgetting the most famous of them all - Alexander Keith's brewery (where we did indulge in a brewery tour - complete with costumed guides, a little singing and dancing and of course a couple of pints to sample!!)

Halifax, I think you're awesome!! (and you even have a shop especially for me!!) 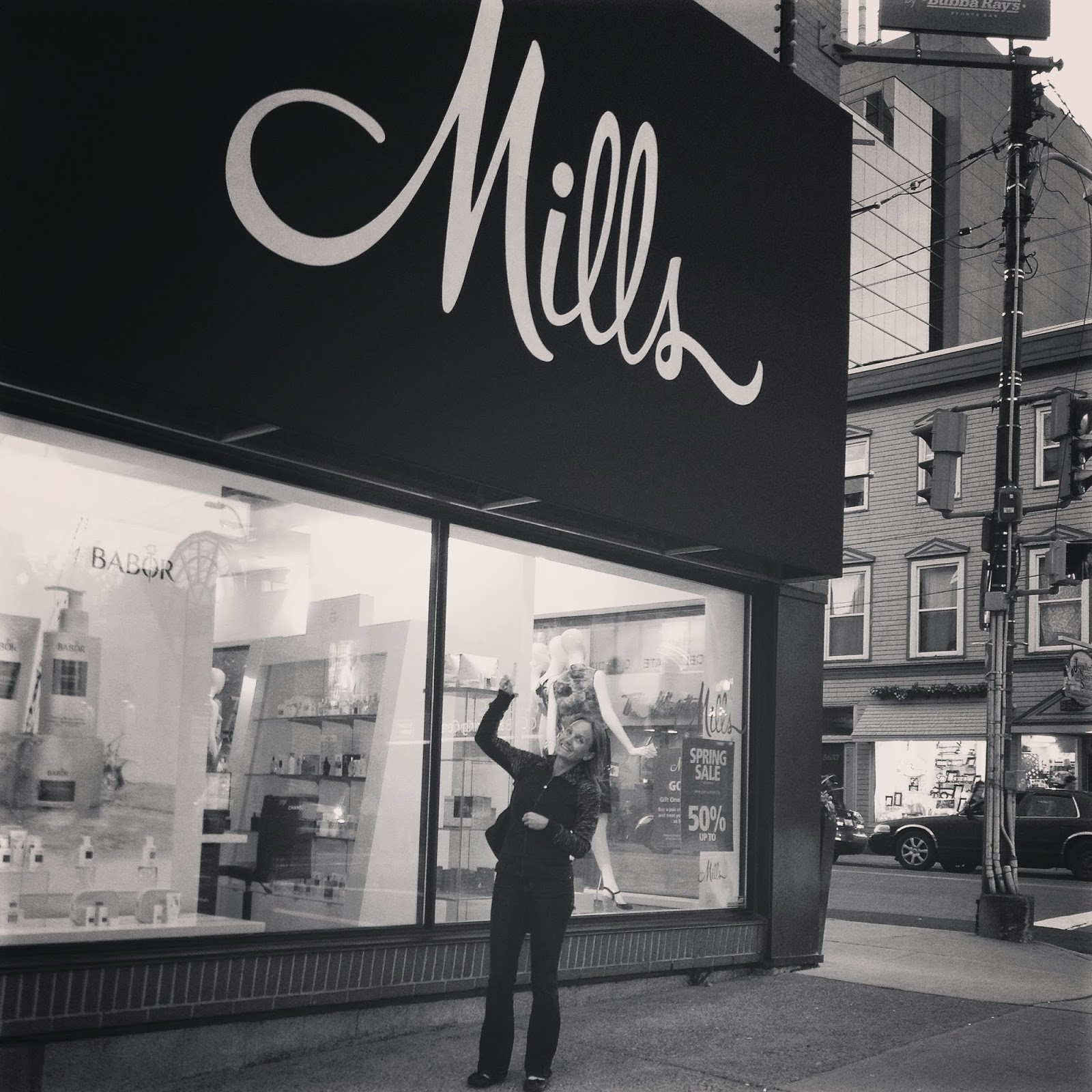