The fun we had at City Chase Kelowna

Oh boy - WHAT A DAY!! I seriously can't remember the last time I had this much fun, with this much adrenalin pumping for this long and got this good of a workout all in the name of the game!! Saturday was City Chase Kelowna. City Chase is actually a global event - dubbed 'the largest urban adventure series'. Think a city-wide version of The Amazing Race - somewhere crossed between a scavenger hunt and obstacle course. And this was pretty much the most information we had going into the event ourselves! So really we weren't sure what we were letting ourselves in for, but it sounded like fun!

All around the city are ChasePoints. In the Kelowna event there were 17 points - the winning team of 2 is the one to collect 10 points and cross the line first - simple eh?! The course was open for 6 hours. As the air horn blew at 10am our first direction was where to go and collect the clue sheet from - on the top floor of the nearby multi-storey parkade of course!! From there we had to decipher the clues to figure out the location and at the same time were given a hint of just what the challenge could be; 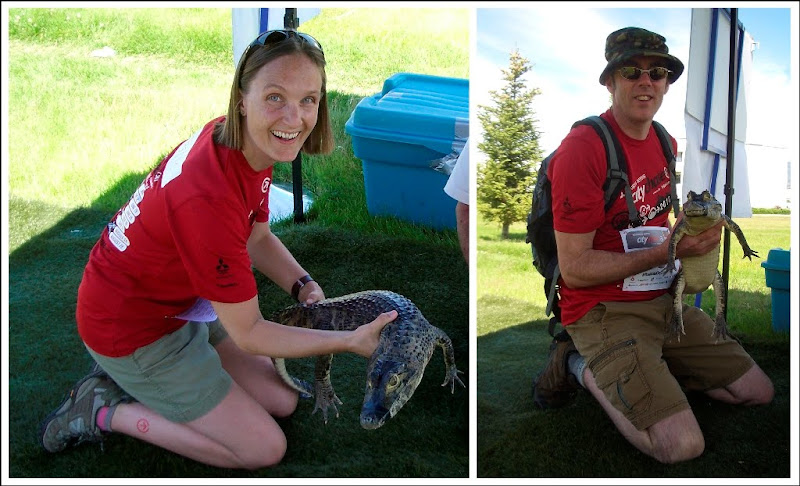 Our first destination was Gyro Beach - a quick bus journey away (oh and the rules meant only foot or public transit could be used - we got complimentary day trip transit passes). The clue was; ENOAC: Abbreviate this orientation-stabling device, add beach and get ready to get bass ackwards! - See simple!! On our way there we kinda stumbled our way into our first 2 chasepoints - having to hold a crocodile for 20 seconds - which was very cool!! And the other we had a choice of finding some doggie-doo or eating dog food - we went with the dog food option (though I think it may have been re-fried beans - still made you gag though!) 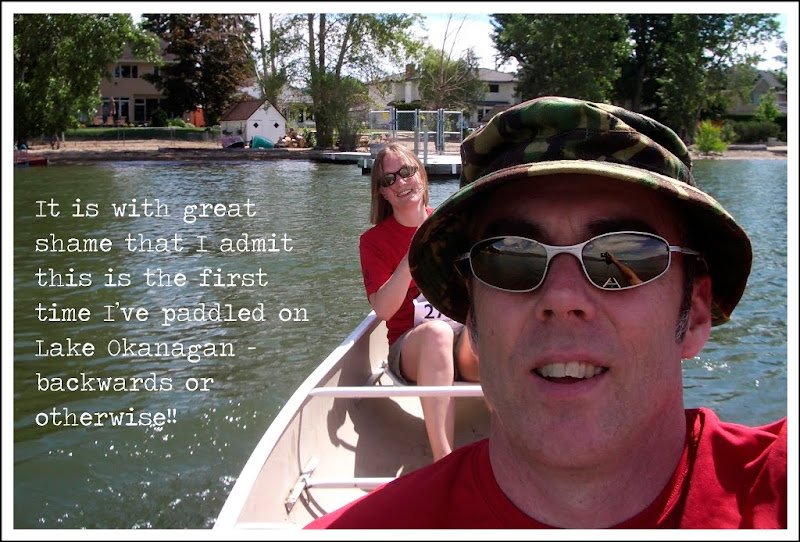 From there Kelowna transit slowed our progress with a 1/2 hour wait before catching a ride to the local casino to play DJ Bingo - great fun actually - guess the tune - match it up with the number on the jukebox sheet and mark off on your bingo sheet. We got bingo pretty quick but with the unfortunate reward of one of us having to eat a live worm to complete the Chasepoint (and this is why I partnered with my game-on husband - thank you dear!) Some serious marching/jogging along to the local beauty college to complete a french braid on a model - together - one hand each tied behind our backs!! Interesting - and trust me - don't ever ask either of us to do ANYTHING to your hair!! (I think the hair stylist took pity on us to give us our point and letting us move on!)

We got four more points all pretty close together. First stop the firehall to do a few fireman training drills, then put up a tent at Valhalla Pure Outfitters and find a member of the public to sit in the tent with us and sing campfire songs for 30 seconds (we smoked the tent putting-up and we found a willing and game volunteer to help us out!), Chris climbed a wall blindfolded with me directing him at The Crux Climbing centre (ok really he just scrambled and felt his way up quicker than I could get the words out! - It helped having done it before I'm sure we got that pretty quick too!) Finally in this particular vicinity a stop at one of the major series sponsors Mitsubishi Motors to do a 4 wheel change. Man - why do Wal-mart want my car for 1 hour when they do this job?! Just get me and Chris to do the job and you'll be on your way in less than 10 minutes! (though my little finger wouldn't appreciate the abuse as we clocked our first mini injury of the day after I tried putting the wheel on single-handedly - woman - step away from the grease-monkey jobs!) 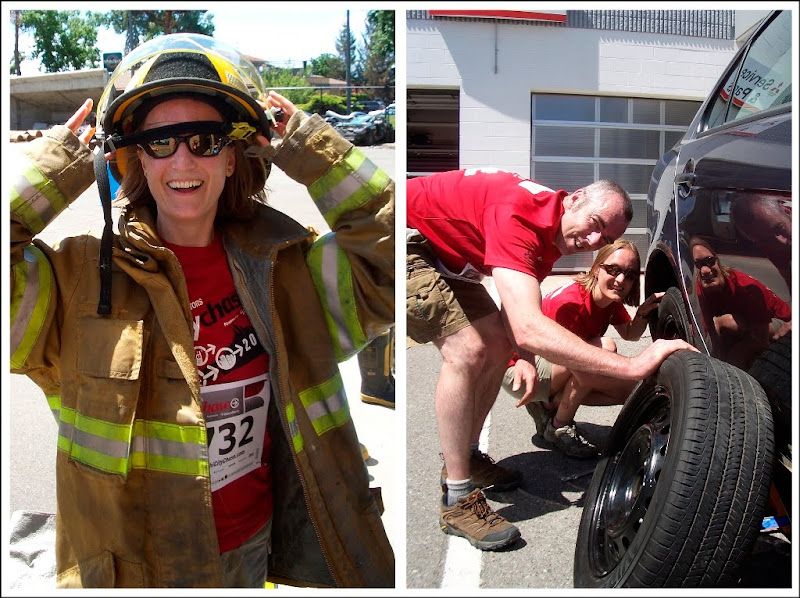 Back into downtown for our final Chasepoint and the finish line. And we chose our longest challenge of the day to end on (you don't know what you're gonna get till you get there so we didn't know this beforehand). A mini scavenger hunt in City Park. We were each given a loaner Blackberry phone and had to communicate with each other using the messenger service. Chris stayed at the Chasepoint whilst I did an Anneka Rice all over City Park and the nearby beach & marina (OK so maybe only our Brit friends might know who the hell Anneka Rice was - the rest of you can google it - I highly recommend finding some Youtube videos - my oh my - it takes me back - hilarious show was Treasure Hunt!!) anyway, I digress...after nearly 40 minutes we had our 10 Chasepoints in hand and made our way back to the finish line.

We finished a respectable 37th out of 90 teams and crossed the finish line at 4hr54mins. Every single minute was a blast! The top placed team crossed the line at an even 3 hours - even they admitted they'd got lucky with the transit on the day but even so - they were fast! Good for them - the top placed teams won a variety of prizes (Blackberry phones, expenses paid trip to compete in the Vancouver event with the chance to represent Canada in the world champs, Subway gift cards, Barefoot Bubbly wines, Sirius Radios etc.) But for most of us - it was just the fun of competing and completing the course. 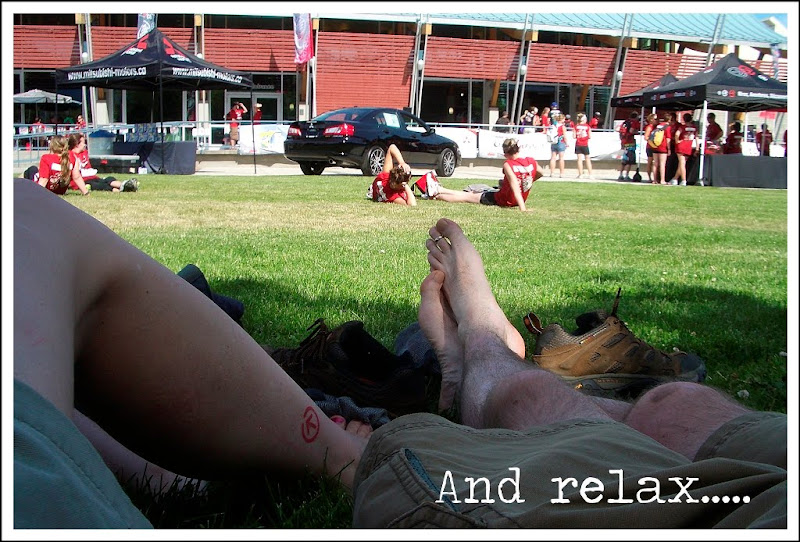 I had intended to write all this last night but flippin' heck I was pretty spent - physically and mentally! What an awesome day.

Finally I would like to thank everyone who generously sponsored us online in aid of the charity Right to Play. We raised $180 and had an early advantage towards our first Chasepoint. So again thank you all - you know who you are!

This was the first year City Chase has come to Kelowna - so I very much hope it'll be back next year - I will be in line to sign up first!! Go and check out the global site and find a City Chase global event near you!