A weekend in Spokane

Last weekend Chris and I took a last minute trip to Eastern Washington before the passports run out and have to be sent away to be renewed! It was destination Spokane, and we were all set to get the Christmas shopping underway!

We actually visited Spokane with my parents just over a month ago and whilst we were there on that visit discovered the gem that is the Davenport Hotel. It's the most beautiful historic hotel that has been lovingly restored to it's former glory. We enjoyed happy hour drinks in the Peacock lounge and we got so comfy there we ended up staying all evening and enjoyed a wonderful dinner whilst watching the world go outside on a rainy evening!
You can actually pick up a brochure from the front desk of the Davenport and do a little self guided walking tour of the hotel. You'll stop by most of the main function rooms of the hotel - the Hall of Doges,  the ballrooms and others. We stuck out heads in as many of the rooms as possible!! The main hotel lobby has glass panels in the ceiling which makes it so light and airy. There's a lobby bar and upstairs off the mezzanine are most of the ballrooms and function rooms - all around on the walls are photos of the hotel in days gone by - I love this kind of stuff - it's so fun to look at the old photos and amazingly the actual structure of the Davenport very little has changed - it's completely recognizable!

For our visit this time around Chris and I stayed right across the street at the Hotel Lusso - sister hotel to the Davenport. It's a charming, smaller boutique hotel housed in a couple of older buildings. We actually switched rooms during our stay (after we decided last minute to stay an extra night!) so we actually stayed in a Deluxe room and then The Firenze Suite (you always know when it's going to be good when it's got a name and not just a room number right?!) 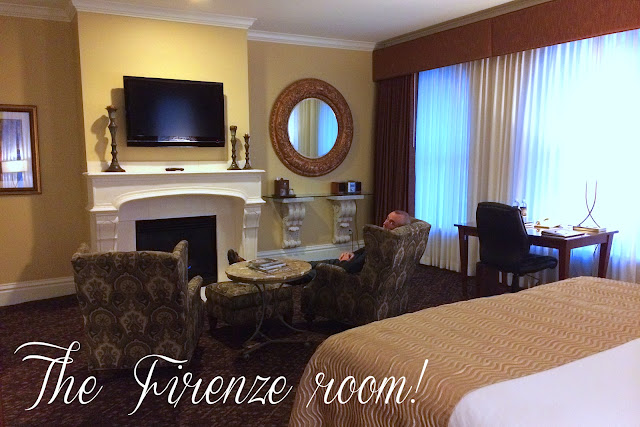 The rooms were lovely and spacious, with charming classic furnishings and the Davenport signature peanut brittle on the pillow in the evening! The bathroom was stocked with L'Occitane products, the bed was way more comfy that ours here at home (I was tempted to bring the pillows home with me - they were no more expensive than what we've paid in the past and I slept like a baby with them!) and the staff were friendly and helpful. And the Post Street Ale House was right downstairs and connected to lobby via a passageway so we didn't even need to step outside to enjoy our choice of 26 draft beers! 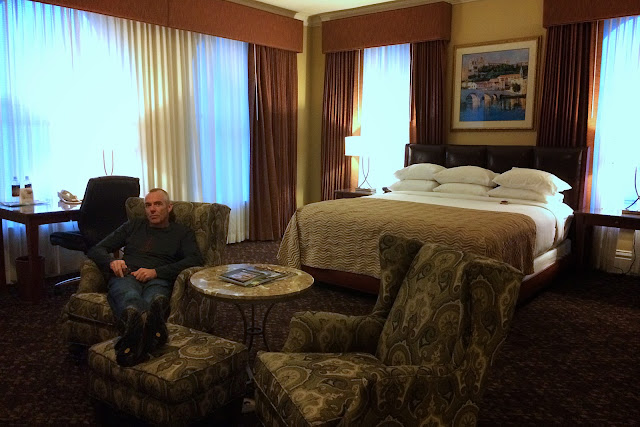 I have to say the staying at Hotel Lusso absolutely MADE our weekend away. It wasn't so much a 'shopping trip' anymore, more a luxurious mini-vacation treat! We had some successful purchases when we were out and about during the day - I'd say more than half the Christmas list has been checked off, and come the evening we were found down in pub enjoying a huge range of draft beers and snacking on chicken fingers and bread pudding!! And the bonus was an extra hour in bed on Sunday morning in our gorgeous room!

I majorly impressed myself by getting up on Sunday morning and heading out for a run. (especially with that uber-comfy bed I was saying about!) All too often on trips I take my gear and don't use it. Yet when I do I love that getting out there for a run is a fabulous way to explore the city a little more! I had no idea where I was going but I knew I wanted to head out along the river! I made a couple of wrong turns and ended up dead-ending down at the river bank, yet 10 minutes later I was on the other side of the river running high up on the bluffs! I spied a couple of great looking coffee houses and bars - we'll have to save those for another time! I was just planning on a 5k to shake off the cobwebs, but at the 2.5mile point I remembered that I needed to squeeze in a 5 miler for Laura's 5 by the 5th! So I explored just that little bit further than planned! of course my pace was lousy with all the exploring, dead-ends and stopping for photos but it was great to be out on a very quiet Sunday morning. I got back just in time for the complimentary morning coffee cakes and herbal tea served in the lobby! 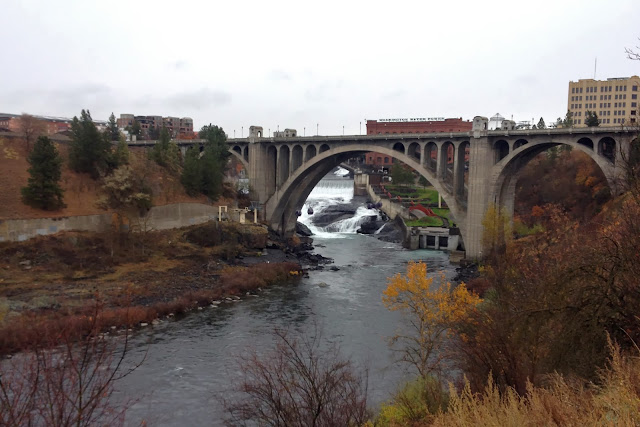 As we were leaving Spokane on Sunday lunchtime we made on final stop - Chipotle for lunch. We've heard so much about this fast-food restaurant, petty much all of it good - but we'd never made it to one. They seem dedicated to sourcing ethically & sustainably raised meats and wholesome fresh produce (and come 2014 a commitment to no-GMOs). It's a simple menu, but it was great! We both had soft tacos - I had barbacoa and Chris had Chicken, piled with fresh veggies and lots of delicious fresh salsa. Messy (Chris and I have always joked that tacos are definitely not first date food!), delicious and cheap! And kudos to Chipotle for making the effort towards offering healthy food - fast food doesn't have to be crap! (And I love this cute cartoon mini-film they have)

Travellers Tip: The local Spokane Costco had Davenport Hotel $100 giftcards for just $79.99 - saving 20% and could be used against our bill for room, food, parking etc. I'm wondering now if Costco often connects with the fancier local independant hotels in their area to do this kind of deal because our local Costco does the same deal for our local high-end resort too!