A couple of weeks ago I was part of a 7 person team taking part in the second Kelowna 'Mudd, Sweat & Tears' event. It's very similar in style to the Tough Mudder & Spartan races out there - basically mud, obstacles, running and some major kick-ass team building/bonding!!

I recruited Chris and I both for my workplace team 'The Bridge Trolls' (we work at The Bridge Services!). I'm not really sure if you need to train for these kind of events - I figured that since the distance was only 12km my regular road running had me comfortably able to manage the distance. And cross training at home doing P90X and Insanity workouts should have me covered in most other aspects, really I think the most important aspect in pre-race readiness is the right mental attitude! 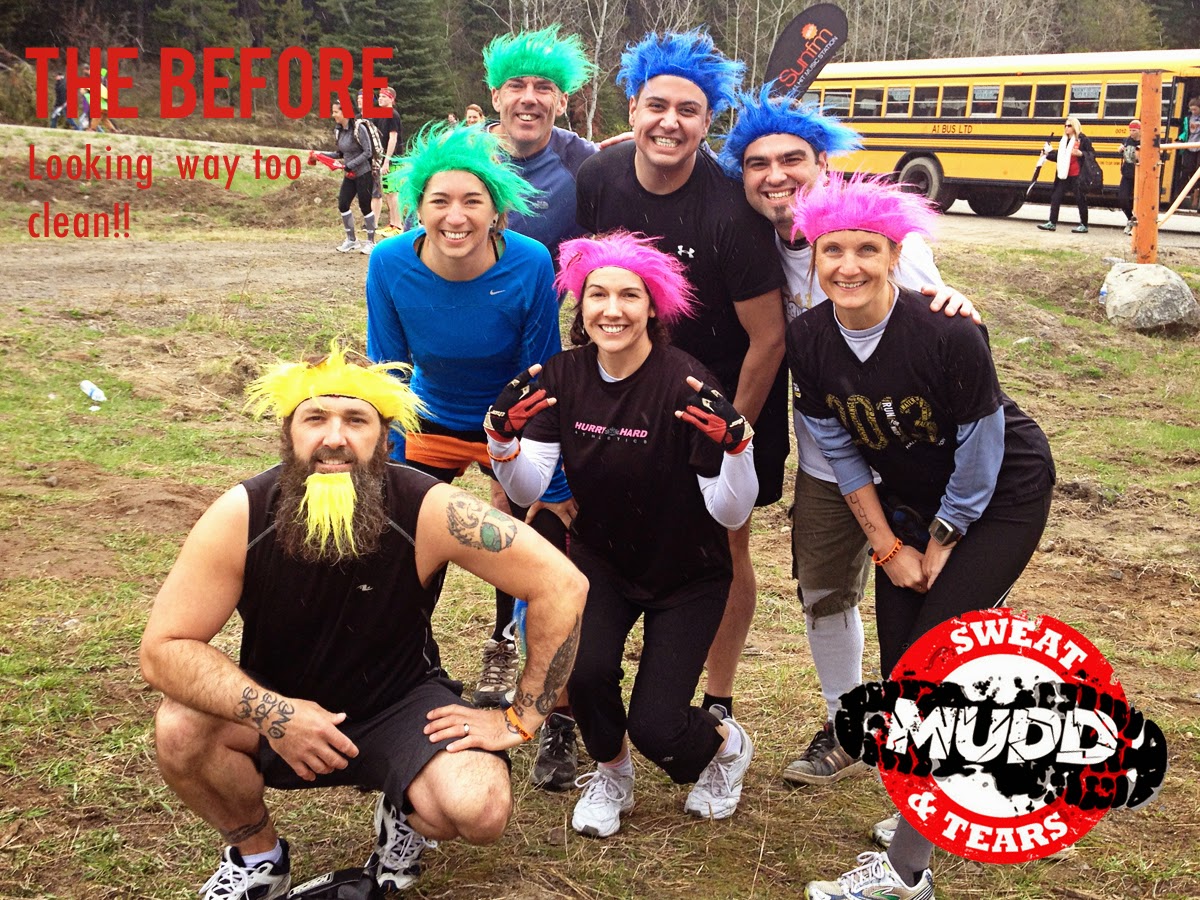 Our team had an assigned start time of 10am - which was quite the treat - being so close to home the alarm was actually set later than it is on an average week-day! Due to the logistics all participants had to be bussed up to the ski resort where the event was taking place. The day got off to a bad start when they were in short supply of buses and it took 80 minutes to stand in line waiting for a shuttle ride...

But we got there....and with a quick dash around to get us registered, changed, bag dropped, potty break etc we were ready to go. Having such congestion at the buses and start line worked in our favour - they introduced an 'extra' start time of 10:15 and since most people had rushed to set off at 10 we had a very small start corral! Perfect once you encountered the obstacles with no line-ups! 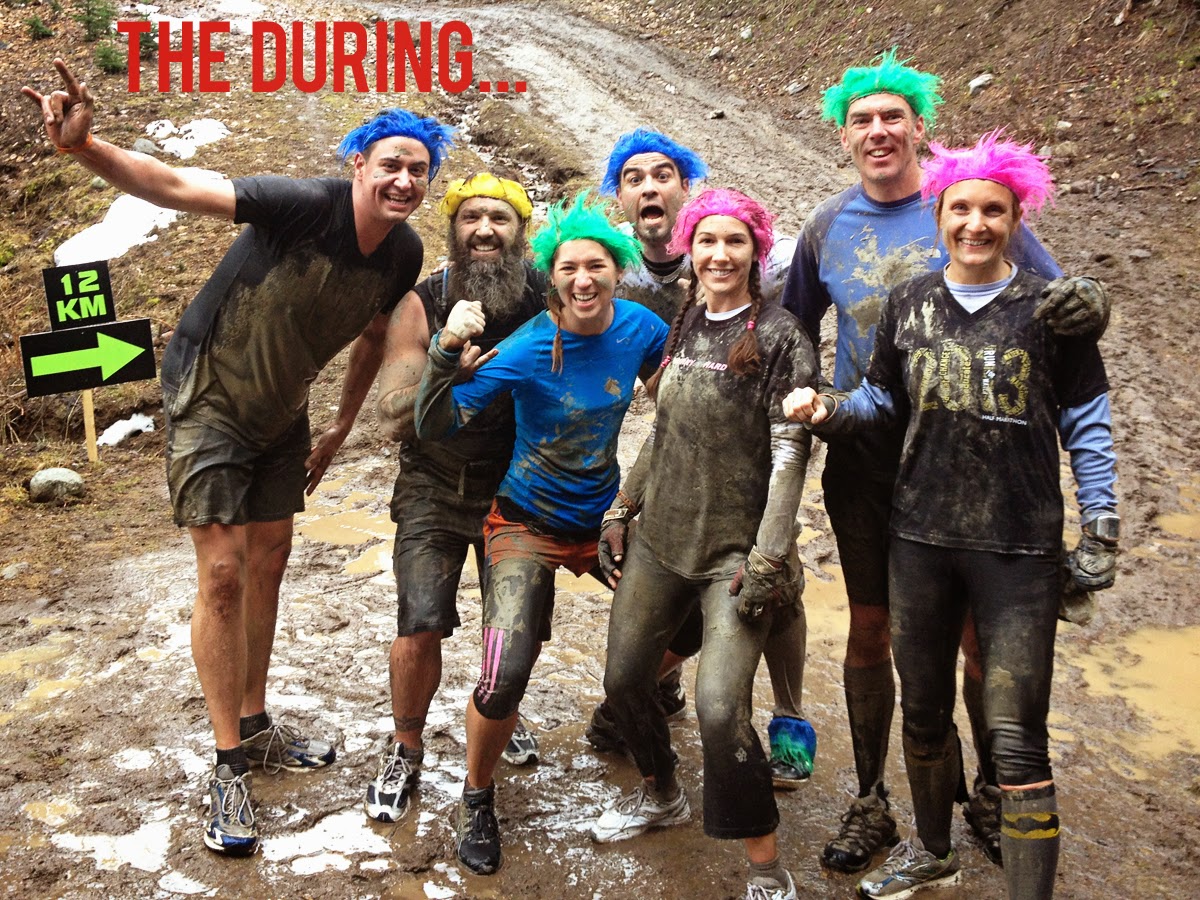 The organizers wasted no time in living up to the first part of the event name - MUD. After scrambling over a 9ft wall we were getting down and dirty in a shallow mud pit, bear-crawling along staying low enough to ensure we avoided the barbed wire hanging just inches above the mud. From there we had rope climbs, more mud pits, more walls, tire pulls, and a couple of demoralizing hill climbs with heavy sand bags (up AND back down again).

Surprisingly in the end one of the more challenging aspects of this race was the running in between obstacles. We'd signed up for a 12km race, but at the end my garmin had only logged around 7km (and was consistent with several other teams). Frankly I didn't mind! We'd run from the bottom of the mountain to the top - around 1200ft elevation gain in just over a mile! and then all the way back down again. (You know, there was a perfectly decent chair-lift right there we all could've used!!) 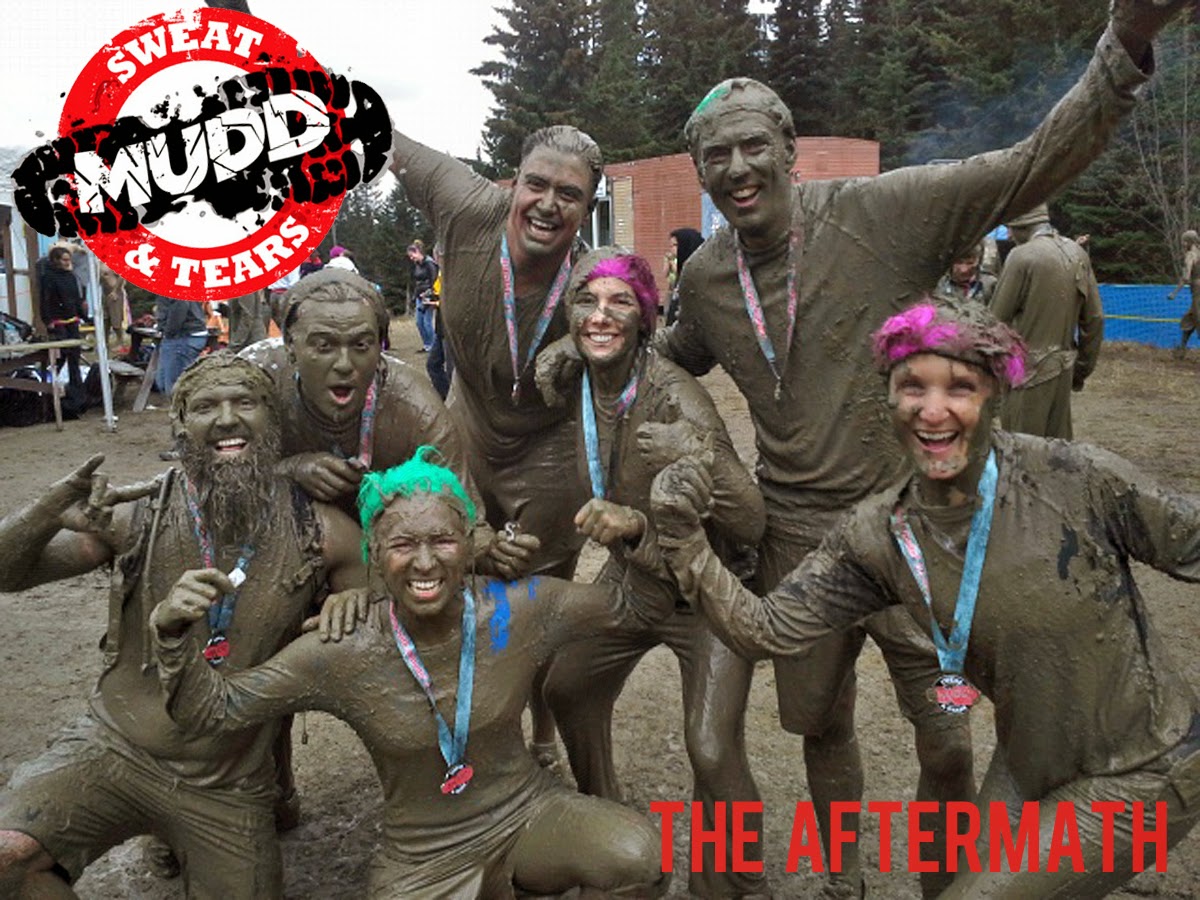 The kicker was the final obstacle. It was an 'Over & Under' type thing. A giant shallow pool of very liquid, slooshy and cold mud. With logs across it - some were 4-5ft high - those were to go over (more difficult than it sounds since they were slick with mud) and then some logs were just inches above the mud pool - and those of course you needed to go under - I mean, of course!. The first 'under' wasn't too bad - we were down and crawling and it was bad. But then there was the second 'under'. And that was the mother of all muddy, dirty obstacles. This log was no more than 2-3 inches above the level of the mud. I stood there contemplating my fate for a few moments. I considered just hopping over the thing and calling it good. And then I decided that 2-3 inches may be just the air gap I needed. I got down flat on my back perpendicular to the log and ducked under hoping and praying and squeezing my eyes as tight as they'd go that I wouldn't end up fully sub-merged. I was one of the lucky ones. I surfaced with a small patch of pinky flesh still visible! Yay for small mercies. The rest of my team did not fare so well and every. single. patch. of. human. body was slick and covered in mud. And I mean EVERYWHERE!

The TEARS part of the even name came right after we crossed the finish line. There was a fire hose hooked up to icy mountain water to wash off a little - and you did have to wash off, or at least try! It really was pretty hard to bear without getting instant brain freeze and it most certainly brought tears to your eyes!

In all, it was a super fun event!