Time has been whizzing by and already 2 weeks have passed since the Vancouver Sun Run. I LOVE this race! This was our third time taking part, the first back in 2006 and we were tourists still road tripping around North America in our RV! Wow, I'm sure we never dreamt back then that we'd be running 8 years later as Canadian residents! 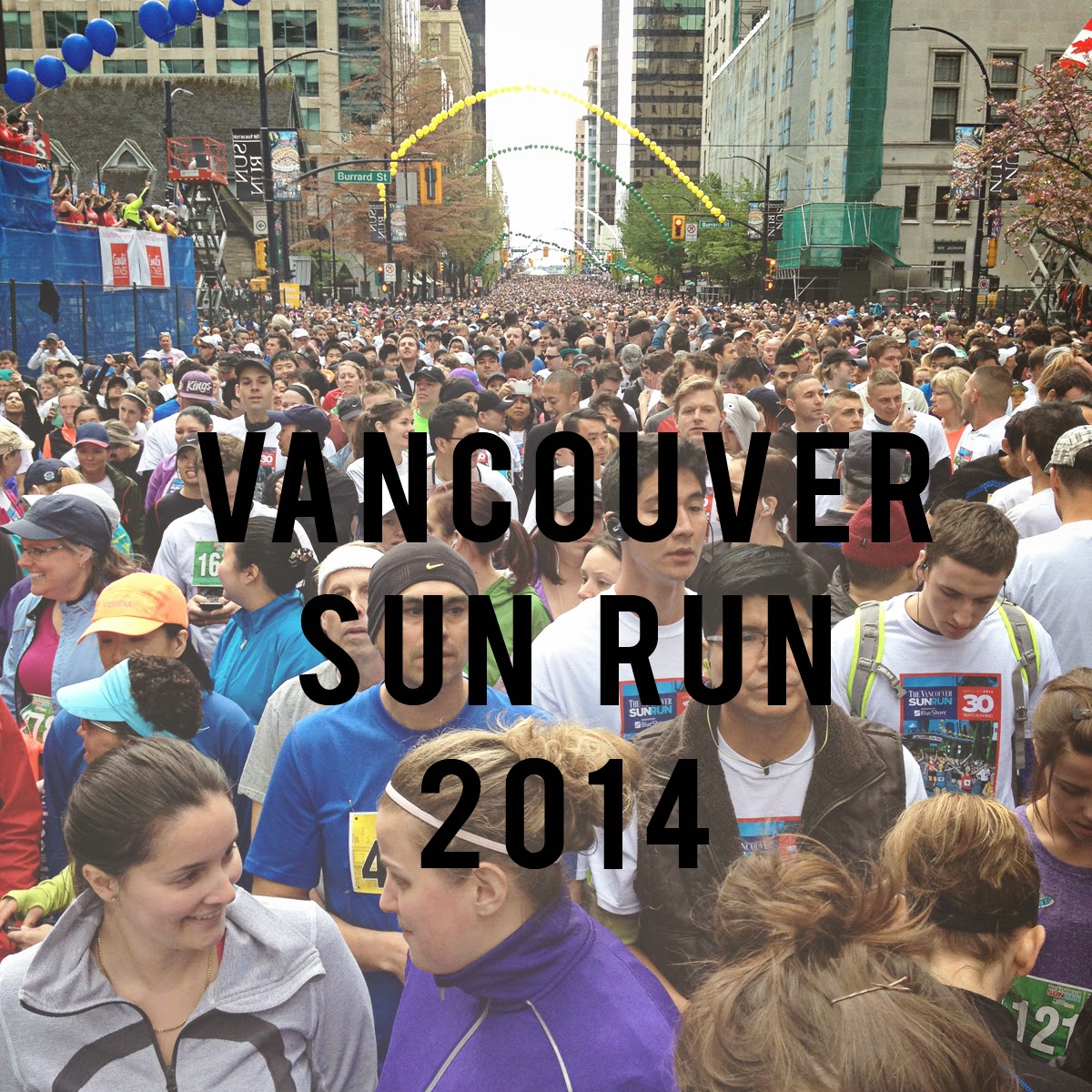 I love that it's such a BIG race - this was it's 30th year and there were over 50,000 people registered! The crowds aren't for everyone but I love the atmosphere and vibe of it all. I love that tight jostling in the corrals at the start and the sight of so many people doing what I love doing - running!

We had a fantastic hotel really close to the start line - just one block away from the back of the corrals. We were actually placed much further forward so we walked about 3 blocks parallel to the start line street until we could enter our corral a little nearer the front.

What I found marvellously liberating and refreshing is the knowledge, having done this race a few times that there was NO time pressure to get to the start line. There are 50,000 people all lined on Georgia Street in 6 or 7 very large corrals and it takes over an hour to get everyone through the start line. And with the race being chip timed your race doesn't start till you cross the start line! There's a countdown and release for each of the corrals so you don't even miss out on the pizzazz of the start wherever you are! Knowing this we opted to loiter in our hotel till the very last minute. I'm a nervous runner pre-race - and I need the bathrooms. Usually multiple times. And really it takes longer to queue at the start line than it did to just hang in our room till I was sure I was good to go!! Plus we didn't want to check bags for clothes, so we made got ourselves completely ready and probably didn't head out till just before 9 (official start time). It really was just a few minutes walk and as we approached our cross street we heard the gun go off for the first corral. We had time to squeeze into our corral as they removed the barricades and edged us forward to the start line. We got going at around 9:16 I think!

I love that the first 1km is down Georgia Street, towards Stanley Park and is a steady and gradual downhill. It's perfect for me to work up to a good pace and breathing pattern with just a smidge of gravity assistance. Unfortunately I spent that first 1km wrangling with my Garmin to pick up a satellite signal on the fly after it failed to start. Frustrating but at the 1 mile mark I got it going (what is it with me and my technology at the start of races - it's not the first time this has happened!!)

I had no great expectations for this race - I never do! The previous 2 times we've run it we've both been hungover and have gone into it with a worst case scenario of 'it's just a nice stroll out on a Sunday morning'! Of course we've always managed to pull out the stops and do a little better than that, even with a fuzzy head! This year we'd had our big night out on Friday but I still didn't feel on top form and liked that it was no pressure - kept me way more relaxed.

The thing is, the only real 10km races I've done were back when I ran in Cyprus - before chip timing and so far back that when I contacted the organizers to try and get the results out of the archives they were too far gone! They were always around the 60 minute mark though. I do have a couple of 10km split times from some of my half marathons - my best being 51 something, but really not an 'official' 10km time. So the only other 10km races I actually have times for are my previous Sun Runs - and they were both just over an hour. So I was feeling pretty confident that no matter what happened I was going to get a new 'official' PR!!

I'm always slower for the first mile or two of a race - since most of my races are Half Marathons it evens out OK, but for a 10km I guess I should work on that!! Chris ran with me and kept me at a good pace - really pushing me on the couple of bridges when I may have slowed. It's a nice, flat course apart from those 2 bridges! As you run the decline on the second bridge you can see BC Place and you know the finish line is close, and as you turn onto the exit ramp there it is! With a final push we made it across the line with the clock showing 1:08! 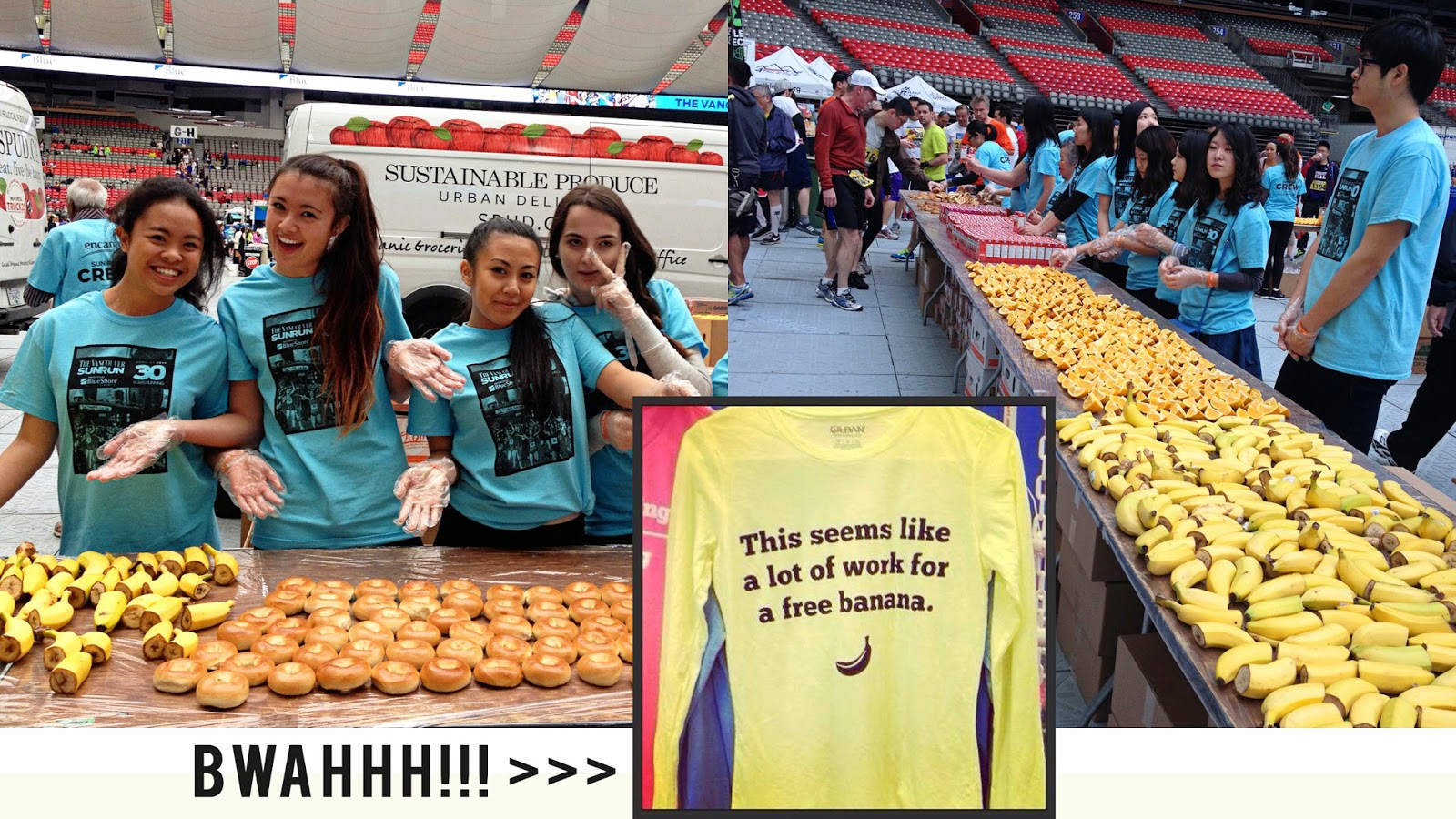 Now as you'll remember my garmin wasn't working so really I didn't know what our time was. I only thought I'd remembered seeing 9:16am on the clock as we set off, but I'm not totally sure. With some rough calculations I hoped that meant we should have finished in around 52-53 minutes, but we'd have to wait till the results were posted online - either way I was happy - it was a good race and  PR no matter what that I was pretty pleased with - considering that I'd not specifically trained for a 10km and wasn't feeling on perfect form. 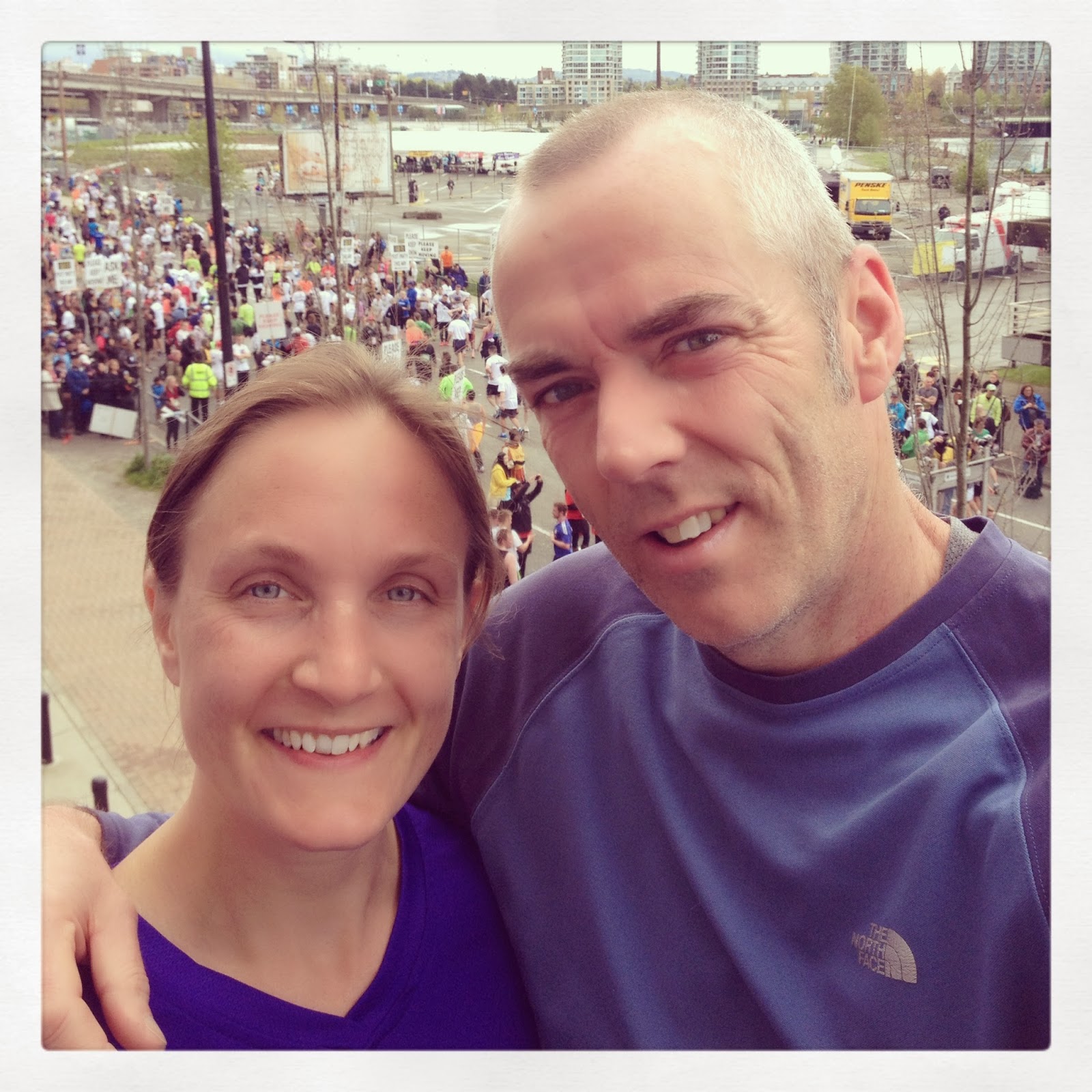 After the race we dashed back to our hotel to grab a quick shower and check out and then headed for lunch at Steamworks Brewpub. I loved that everywhere you looked in Vancouver that afternoon all you could see were runners and happy faces - many people were still wearing their race t-shirts and bibs and you had the feeling that you were all in one giant club. This is the atmosphere that I was talking about!