This weekend was a first for me...A double whammy of races served up on one weekend! 10km Saturday morning followed by the Rock 'n' Roll Half Marathon on the Sunday. And it was awesome :-)

It's been a while since I've done a Rock 'n' Rock race (2011 Vegas to be precise). I was looking forward to it. Not least for the fabulous bling that had already been previewed on social media ahead of the race. I'm not usually one to run for bling but the medals sure were purdy!! And when running both races you also qualified for the Remix medal - so 3 for the price of 2!! 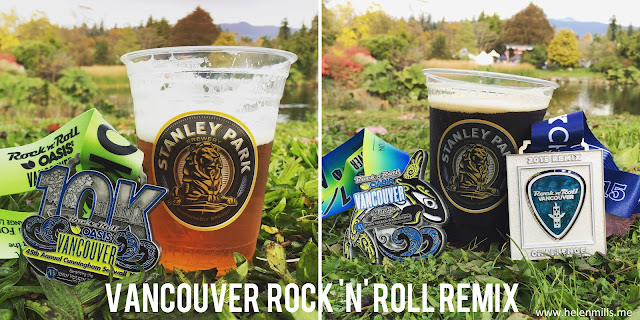 Unfortunately I was missing my #1 cheerleader this weekend so I headed off on the 4.5 hour drive to Vancouver on my lonesome. Thankfully the weather was good and still no sign of snow on the mountain passes yet. The 2 races both start at opposite sides of the downtown area and then finish in yet another location in Stanley Park - 3 points on a triangle to figure out. But I found an ideally placed Airbnb place which worked perfectly for my accommodation.

My plan for the weekend was to race the 10km (And my big goal was a sub-50 minute) and then take the Half kinda easy going with no time goal.

It was an easy start come Saturday morning since the 10km race didn't start till 9:30am from English Bay. I headed off from my apartment for a 3/4 mile warm up easy run to the start line and then stood in line for 20 minutes for the porta potties before jumping into a corral at the last minute. I was in corral 2 so we got going pretty quickly. The course follows the seawall the entire way around Stanley Park which makes for a fabulously flat course! I was going well for the first 3 miles - probably a little too fast but I was really trying to push it out. Just before the 4 mile marker we turned into the park for a few hundred metres to do a short 'out and back' (I guess to make up the total distance) - and the little inland detour was a savage little hill. It was about here the wheels started coming off. I guess I had pushed too hard those first 3 miles at paces that were a little too ambitious. The hill didn't help and I took a short walk break. Once we turned I got going again but some of the wind was gone from my sails. Mile 4 ended up my slowest mile and way off my pace. I picked it up a bit for the last 2 miles but never enough to get back on track. I was entertained by Elvis singing in the last 1/2 mile and was happy to turn past the sailing club and see the arch of the finish line in Devonian Park. I crossed the finish line around 51:20, which is actually a new PR so I shouldn't be too disappointed at all! Happy to receive the first of my beautiful medals and a Stanley Park Brewing Pale Ale. With the official time as it is looking at the results post race I've got to be pretty pleased to finish in the top 6% of all female runners. And of all those old birds like me aged between 40-44 (there were 316 of us - wow! I finished 15th!) 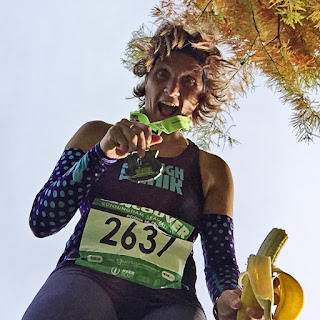 I met up with a fellow Team Tough Chik friend Tina for lunch and then spent the afternoon strolling around Vancouver. It was a bad choice for self care. I clocked around 5 miles of walking, ate poorly, didn't rehydrate enough and by the end of the evening was vegging out in my apartment binge watching Homeland on Netflix with a headache from hell. It wasn't a good feeling knowing I had a half marathon to do the next morning!

The Half got going at 8:15am this time from the Convention Centre side of town. It was a easy stroll down the hill for me, chatting to Chris briefly on his way to work. I wasn't feeling pepped up at all - I had a dull headache still, hadn't slept well and experiencing a bit of numbness/aching in my foot when walking. It was just as well I didn't have a goal for this race other than to finish! The start line was much busier (and yet the potty line ups were much quicker!).I stayed bundled up in my throw away hoodie to the side of my corral until the last minute. I was in corral 4 so watched the first 2 waves head off. They counted down for Corral 3 and the crowd surged forward with me in it - There were corral 4 people all around me but yet we didn't seem to stop and before I knew it I was across the start line and on my way! It was the most understated and unexpected start of a race, and given my nonchalance and mental state it was actually probably the best thing for me. As soon as I get going I settle in and get comfortable. Unsurprisingly the headache and foot pain were soon distant memories and I started enjoying myself. Almost immediately we headed through Gastown, it's a great little area of the city with brick streets, old buildings and lots of character - a very picturesque area to run through and reminded me it was more than just the running! A mile in we passed a large gaggle of hobos outside a shelter and it was the perfect place to ditch my throw-away hoodie (I hope someone is keeping warm in Chris's too-small-for-him Icebreaker merino wool top!). The course headed out along the railway tracks and industrial port area before looping around, passing through Chinatown, BC Place and Rogers Arena and then onto the Edgewater along False Creek to Stanley Park. Instead of running the seawall like the 10k the course took us into the depths of the park along it's many greenways and roadways surrounded by towering green trees and lush forest. The last couple of miles were along the roadside right next to the seawall path we'd run the day before, with the final 1/4 mile putting us onto the path by the sail club and through the same finishers archway. I'd had a solid comfortable race and was happy to finish in 1:55hr. Another fabulous medal, another fabulous beer and my first successful double-run weekend! 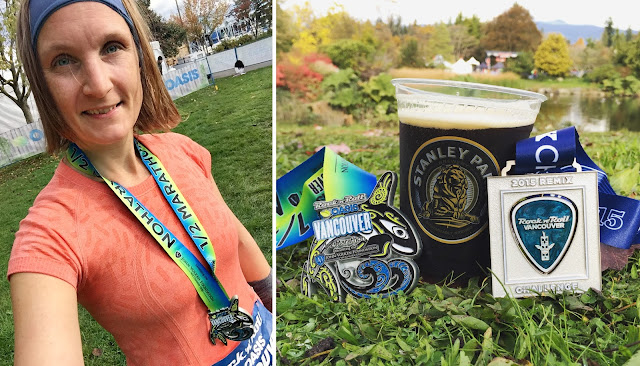 I stayed a little while at the finishers area. Yukon Blonde were headlining the post race party and the sun had come out. The beer went down sweetly but I was also eager to get going for my long drive home. It's definitely not quite as fun doing these race weekends solo. I walked the mile back to the apartment all the while looking out for the bus that never came (but then it probably was an ideal shake-down for my legs anyway!), jangling my medals as I went!