This ankle injury really knocked me for six. I'm currently undergoing physiotherapy for a sprained ankle, but mostly it seems to be a waiting game. Seriously 'a sprained ankle' sounds so pathetic and un-serious! But 2 months on and I have a new appreciation of how serious it can be. And reading Wikipedia and hearing stories of people were weren't fully back to normal until 6-12 months kind of freaks me out!

According to my physiotherapist I'm doing well since I've been walking with ease and without pain for a few weeks now. But as soon as I do anything beyond that - even just 'running' to the door to greet Chris when he comes home, or rush to grab a pan that's bubbled over I'm reminded that all is not right. Right now walking is great and I'm really trying to get out there more for a walk after work or on the weekends.

So with all that I was incredibly nervous about signing up for any races this year. I am the Queen of procrastination when it comes to registering for races at the best of times. I'll train for them, with the full plan and intention to do them but I'm not great at signing my life and my money away until the last minute.

However my hand was forced this week. Twice!*

One of the items on my manifesto that you may or may not have noticed I'd snuck in at #15 there was the intention to run a marathon. Yes. The FULL 26.2 mile marathon - Yikes. I'd already decided that this is something I want to do just once. I LOVE the half marathon distance. For me it's the perfect balance, requiring commitment but without obsessing about the training hours required. The Full marathon is a whole other ball game. It's more than I want to do, more than I want to commit my life to. But I'm in a great place right now, mentally and physically when it comes to my running. And if I don't do it now, I may never do it. So..... 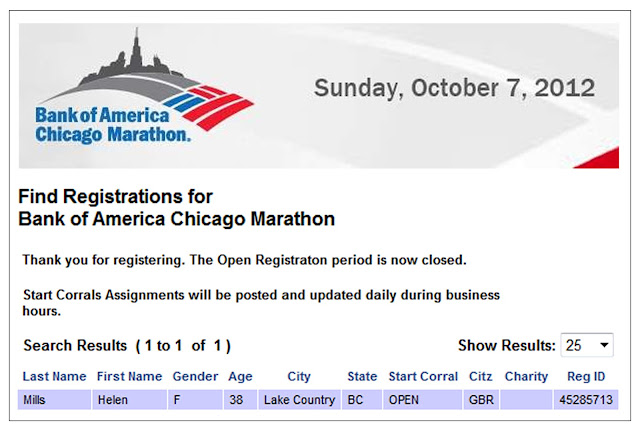 It had to be a big one. It had to be the main event (not an event where there's a Half or Full option, because the big event in those cases is always the Half) and it to be a 'destination' race for me. So the Chicago Marathon it was!! I follow a few blogs of people who'd run last year and it sounded awesome. I also love the fact its pretty flat (because I'm quite happy to take anything that will make this ordeal experience easier!). Registration opened on the 1st February but after reading around on the interwebs it appeared that whilst it did sell out, it wasn't too quick, which sounded great it my books. I could mince and generally procrastinate as is my way. Truth be told I wanted to know I was running again before I forked out my $175 non-refundable registration fee. But Facebook told me it wasn't to be. Just 6 days after registration opened they announced they would be selling out the 40,000 spots later that morning and for me, sat at work (did I say work? - surely I would never be looking at Facebook at work?!?!...uhumm) it was crunch time. Chris started quoting Nike ads (just do it!) and so I DID IT! Less than an hour later they posted it was sold out!

And so now, with poorly ankle still bugging me I sit with green-eyed longing at the other runners buzzing by my window and desperately want to get out there and remind myself I can still do it, and more to the point that I will survive 26.2 miles on October 7, 2012.
*more on the second 'race' soon!