It's about a 3 hour drive from us here so we packed up the car with a tonne of camping stuff, a dog and 2 people and headed off. We stopped briefly en route in Revelstoke to stock up on some last minute provisions and a bite to eat since we'd be arriving after dark and too late to start cooking. We set up camp for our 2 night adventure at the Illecillewaet campground just a couple of km's from Roger's Pass, right on the side of the Trans Canada Highway. You'd think that the traffic noise would be distracting and ruin the 'in the moment with nature' and you'd be right, except for the raging river noise that drowned any other noise out - Illecillewaet means 'Raging Waters' in First Nations-speak! This was no babbling brook that's for sure!

Our first night was a quick set-up of the tent, and a stroll around the campsite to explore and get our bearings, and to try and get the wriggles out of Meli, who was insanely excited with all the new smells and sticks, and even fancied her chances at a quick dip in the river - it would have been quick, before she'd have been whisked away by the crazy rapids! (we kept her on a tight leash!)

Saturday morning was a slow start. It was a pretty chilly morning for us initially, but as soon as the sun appeared over the surrounding mountain-tops it warmed up (and reached a nice, comfortable high of around 23-25 which was perfect hiking temps!). I love waking up in a new place that you arrived at in the dark - You're never really sure what it all looks like until you see it in the daytime! We took Meli for a walk arouond the campsite and headed along the campsite road a little so she could have a chance to run off-leash (that girl isn't exercised unless she's had some off-leash time!), we paid our camp dues, went to the visitor centre to pick up some trail maps and chatted to a ranger and generally took out time getting our stuff together for a nice long hike!

We finally set off on the Asulkan Valley trail around noon. It was billed as a 13.8km trail with around 2100 feet of elevation gain and would steepen after 4km....as were all the trails at this time of year it was a strict pets-on-leash area due to bears in the area. Our girl isn't the greatest on a leash so this was gonna be a looooong 13.8km!!

The trail started through some gorgeous old growth forest, following the river. Very green, mossy and easy underfoot. We crossed the river a couple of times on small bridges and caught glimpses of waterfalls high above us tumbling down the valley sides. As we climbed the forest thinned out and it got rockier. As promised the incline increased dramatically after about 4km. It was at this point I was rather glad of am energetic and exuberant puppy tethered to me - her constant pulling on leash that is normally a pain in the backside was welcome assistance, literally pulling me up! Good job Meli-mou!We weren't able to see where we were headed exactly and we encountered several false peaks and even thought we'd seen a hikers cabin which never materialized!! As our GPS read 7km there was still no trail-end in sight! What turned out to be the final 1km was along a knife-edge climbing incredibly steeply up towards the glacier and finally, finally we saw a 'End of Trail' sign and the Asulkan Hut. 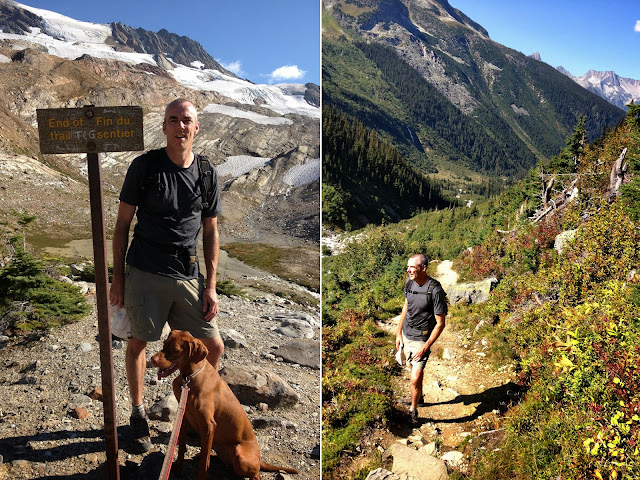 It was a welcome relief and the the views were spectacular. It was mountains for miles, and glaciers above us, and even a glimpse of the thin ribbon of black-top as the Trans-Canada snaked its way through the pass way, way below us. There was a small, mountain stream and an open area where the water collected in shallow pools before tumbling down the mountain so Meli was able to have some crazy run-around time cooling off in the water whilst we ate our lunch.

The journey down was tougher - steep downhills on loose rock is never fun, and to prevent a serious spill we had to keep Meli off-lease for the first couple of km`s till it started leveling out - pulling downhill isn`t quite as appreciated as the uphill version was! Since it was getting later we lost the sun once we descended back down into the valley and the mountains crowded around us. It added an eerie gloom to the hike and we were keen to get back to camp and not see any hungry bears.

Back at camp we finally discovered what it takes to wipe out our baby girl - the Asulkan Valley hike! We pulled her bed out next to the campfire and she curled up and slept the evening away! We enjoyed our fire and a few bevvies and a late BBQ supper before heading to bed ourselves! 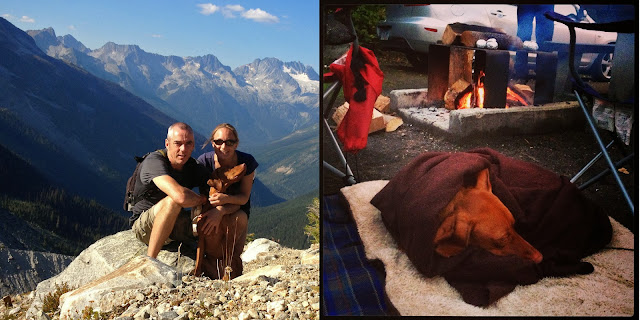 Our second day we took a nice, leisurely stroll along the abandoned rail-bed from the old Glacier Hotel. It was about an 8km out and back route and obviously nice and flat - it was perfect to loosen up those stiff limbs before crunching ourselves back up into the car for the journey home!

We were so lucky with the weather - we tried this trip 2 years ago and got washed out so this was the perfect weekend a long time coming! The hikes we picked were gorgeous and the views were to die for! The Illecillewaet campground is the trail head for quite a number of hikes in the park so it was a perfect base-camp!